Generals In Blue and Gray

Wilmer L Jones has written an introduction to the Civil War. After thousands and thousand and thousands of books on the subject he is introducing it? Indeed! Let me explain. 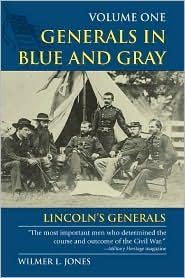 This volume uses biographical sketches of twenty-one Union generals to tell the story of the Civil War and examine the implementation of Northern strategy. Among these generals are prominent figures like Ulysses S. Grant, George McClellan, and William T. Sherman, as well as Daniel Sickles, whose actions sparked intense controversy at Gettysburg, and the lesser known John McClernand, a congressman who lobbied for his own appointment. In Wilmer Jones's accounts, which focus on character, personality, leadership ability, military skill, and politics, each general comes starkly to life.
This well written volume might appeal to two widely differenct categories of people:
(1) the total Civil War novice. That is the person who was more focused on the opposite sex in 10 grade history, feel asleep there or only recently came to the realization that it could be interesting and worthwhile to know about. The book is like looking over the cast of character description in an play before you see the play. Who are these people?
(2) the total civil war buff and expert. That is the person who has read hundreds of books on the subject, can describe in detail strategy, details and consequences of nearly every battle that was fought. The interest would be in finding out where these people came from, their family background, education, romantic interests and what happened to them after the war was over. Also when they died and where they were buried, in case you want to visit any or all of the cemetaries.
Would you believe believe I read every word? And plan to check out Volume Two: Davis's Generals.
Your right. I'm a Civil War buff. It's an obsession.
Posted by troutbirder at 1:34 PM

Not a bad obsession to have. I am more of a novice though I did have a serious case of goosebumps at Gettysburg.

I'm a buff. It's an obsession. I've always had a calling to American history, especially the Civil War, and love to write about it. I met and married someone who also had the same obsession. We enjoy it together.

Arkansas Patti: I always find myself weeping on the battlefields in Gettysburg. I weep for soldiers on both sides. It was such a horrendous fight.

I will have to look into this book. Thanks for the suggestion. I love civil war history (being from Virginia will do that to a person!). Currently I am more focussed on the Roman Empire era. But it's always good to know about great civil war books!
Thanks!
Ann