Continuing with a few of my favorite poems.  It's not a top ten list of any kind. Just a few of those poems which I remember well because at a certain point in my life they had influence and meaning to me personally.  I started with Percy Bysshe Shelly and Ozymandias. My next choice was The Testament of a Fisherman by Robert Traver. My next choice is Dover Beach by Mathew Arnold.

I don't believe I would have chosen this poem a few decades ago. History though shows us  the ebb and flow of civilizations and life.  Recent years have brought us the loss of our eldest son, five grandchildren who live far away and our 50th wedding anniversary along with serious health issues. The daily news sees numerous crises, tragic events along with a potential catastrophe unfolding at the nations center. Yes Dover Beach speaks to me these days......


The sea is calm tonight.


The tide is full, the moon lies fair


Upon the straits; on the French coast the light


Gleams and is gone; the cliffs of England stand,


Glimmering and vast, out in the tranquil bay.


Come to the window, sweet is the night-air!


Only, from the long line of spray


Where the sea meets the moon-blanched land,


Listen! you hear the grating roar


Of pebbles which the waves draw back, and fling,


At their return, up the high strand,


Begin, and cease, and then again begin,


With tremulous cadence slow, and bring


The eternal note of sadness in.


Heard it on the Ægean, and it brought


Into his mind the turbid ebb and flow


Of human misery; we


Find also in the sound a thought,


Hearing it by this distant northern sea.


The Sea of Faith Was once, too, at the full, and round earth’s shore


Lay like the folds of a bright girdle furled.


But now I only hear


Retreating, to the breath


Of the night-wind, down the vast edges drear


And naked shingles of the world.


To one another! for the world, which seems


To lie before us like a land of dreams,


So various, so beautiful, so new,


Hath really neither joy, nor love, nor light,


Nor certitude, nor peace, nor help for pain;


And we are here as on a darkling plain


Swept with confused alarms of struggle and flight,


Where ignorant armies clash by night.
Posted by troutbirder at 5:24 PM 5 comments:


Continuing with a few of my favorite poems.  It's not a top ten list of any kind. Just a few of those poems which I remember well because at a certain point in my life they had influence and meaning to me personally.  I started with Percy Bysshe Shelly and Ozymandias. My next choice is The Testament of a Fisherman by Robert Traver.

John D. Voelker, also known by his pen name Robert Traver, was a noted lawyer, judge, author and fly fisherman from the Upper Peninsula of Michigan. He grew up in his hometown of Ishpeming. His book Anatomy of a Murder was a highly reputed best seller and made into a Academy nominated movie staring Jimmy Stewart and Lee Remick.

I became a devoted fisherman at a very young age. I graduated from the University of Minnesota and took my first (and only) teaching job in southeastern Minnesota's Bluff County.  I quickly discovered I had moved into the only county in The Land of Ten Thousand Lakes without a lake.... which upon further investigation turn out to have many free flowing limestone springs and cold water creeks. Perfect for trout. I gave it a try mostly teaching myself how to flyfish.  When asked later to explain my passion for this particular form of fishing, Travers poem expressed it best.... 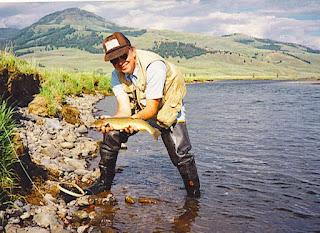 A young Troutbirder's cutthroat trout on the Lamar River in Yellowstone

“I fish because I love to. Because I love the environs where trout are found, which are invariably beautiful, and hate the environs where crowds of people are found, which are invariably ugly. Because of all the television commercials, cocktail parties, and assorted social posturing I thus escape. Because in a world where most men seem to spend their lives doing what they hate, my fishing is at once an endless source of delight and an act of small rebellion. Because trout do not lie or cheat and cannot be bought or bribed, or impressed by power, but respond only to quietude and humility, and endless patience. Because I suspect that men are going this way for the last time and I for one don't want to waste the trip. Because mercifully there are no telephones on trout waters. Because in the woods I can find solitude without loneliness. ... And finally, not because I regard fishing as being so terribly important, but because I suspect that so many of the other concerns of men are equally unimportant and not nearly so much fun.”
― Robert Traver