We went and saw the movie The Help a couple of days ago. Mrs T. had read the book and highly recommended it. Afterwards, she said the movie was faithful to the book by Kathryn Stockett.
I thoroughly enjoyed the movie. 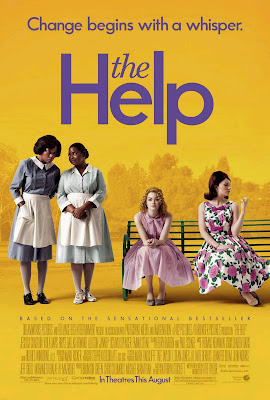 Synopsis:
Set in Mississippi one hundred years after the abolition of human slavery, Jim Crow is beginning to come under attack.
The novel is told from the point of view of three narrators: Aibileen Clark, a middle-aged African-American maid who has spent her life raising white children, and who has recently lost her only son; Minny Jackson, an African-American maid whose back-talk towards her employers results in her having to frequently change jobs, exacerbating her desperate need for work as well as her family's struggle with money; and Eugenia "Skeeter" Phelan, a young white woman and recent college graduate who, after moving back home, discovers that a maid that helped raise her since childhood has abruptly disappeared and her attempts to find her have been unsuccessful. The stories of the three women intertwine to explain how life in Jackson, Mississippi revolves around "the help", with complex relations of power, money, emotion, and intimacy tying together the white & black families of Jackson.
Skeeter is a young aspiring journalist surrounded by friends and relatives who cling determidly to the racial attitudes of the past. The murders & terrorism of that era are only mentioned briefly in the movie. The menial work of the black "help" is locked in for each succeeding generation. It isn’t exactly slavery, but it is a caste system at the core. The black maids need the jobs but their lot is to be bombarded with the pain of disrespect, condescension and abuse. Skeeter struggles to find some of these women to dare to tell their personal stories.
The most telling white character is Skeeter's mother played by Sissy Spacek. Not a raving over the top bigot as some of the portrayals, she simply goes along to get along with her racist friends. This portrayal struck me as most sad and realistic.
Besides the broad strokes to portray some of the characters, there is the come uppance humor. Some very funny but way over the top unrealistic, involving some commodes scattered across one bigot's lawn and a fecal pie. Other than that, though, I highly recommend this movie. Sometimes it’s the down-to-earth stuff rather than those things that take up chapters in the history books that cuts closest to our own experiences of the heart.