On Pluto: Inside the Mind of Alzheimer's 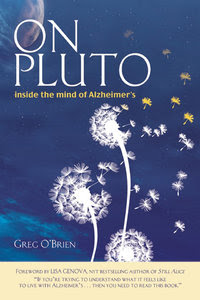 From childhood on I’ve always loved books about outer space, astronomy and the planets, so when I plucked a book titled On Pluto off the shelf of our local small town library, I was more than a little surprised to find it subtitled Inside the Mind of Alzheimer’s. I knew I had to read it for you see my grandmother & my mother had this affliction.


Alzheimer’s is the sixth leading cause of death in the U.S.A. and the only one of these diseases on the rise. More than 5 million Americans have been diagnosed with Alzheimer’s or a related dementia. Chances are you already personally know of someone close or surely will someday.


Greg  O’Brien, an award-winning investigative reporter, has been diagnosed with early-onset Alzheimer's. One of those millions.  The short term memory, the basis of cognitive impairment, goes first but our long term memory and skill habits allow us to carry on.  Using that basis,  O’Brien decided to fight it by telling his own story of  using what remain of his lifelong journalistic skills.  O’Brien is a great storyteller. I’ve read lot of information about this disease in recent years but this book is different. It puts the reader   in the role of the “other” that is from the inside looking out.  This book is raw, painful, and soul searching. For my generation and others to follow,  it’s a roadmap to navigate the future. How to fight it. How to live with it and understand it.  And never give up…. 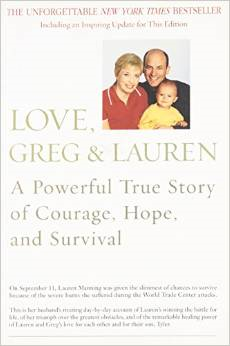 Early on the morning of September 11, 2001, Lauren Manning-a wife, the mother of a ten-month-old son, and a senior vice president and partner at Cantor Fitzgerald-came to work, as always, at One World Trade Center. As she stepped into the lobby, a fireball exploded from the elevator shaft, and in that split second her life was changed forever.

Lauren was burned over 82.5 percent of her body. As he watched his wife lie in a drug-induced coma in the ICU of the Burn Center at New York-Presbyterian Hospital, Greg Manning began writing a daily journal. In the form of e-mails to family, friends, and colleagues, he recorded Lauren’s harrowing struggle-and his own tormented efforts to make sense of an act that defies all understanding. This book is that e-mail diary: detailed, intimate, inspiring
messages that end, always, as if a prayer for a happy outcome: We share this story day by astonishing day. Greg writes of the intricate surgeries, the painful therapies, and the constant risk of infection Lauren endured. Through his eyes we come to know the doctors, nurses, aides, and therapists who cared for her around the clock with untiring devotion and sensitivity. We also come to know the families with whom he shared wrenching hospital vigils for their own loved ones who were waging a battle that some would not win. For those with eighty percent burn the odds of survival were very slim. I think spellbound best describes my reaction to the reading of this story.....
Posted by troutbirder at 5:52 PM 11 comments: 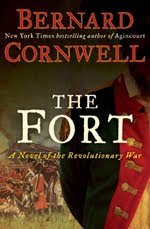 So why did Henry Wadsworth  Longfellow make a national hero out of Paul Revere, when Revere was only one of the many riders sent our by Dr. Warren on that fatefull night? This in a poem written many years later just before the civil war.

And why was the biggest naval disaster to befall the American cause before Pearl Harbor, an obscure struggle unremebered in most history books?
And what were the British up to building a fort in the far north of Massachusetts at Majabogwadice (now Castine, Maine)?
Why was Paul Revere court martialed on charges of ineptitude, & dereliction of duty bordering on treason?
Should Massachusetts have demanded and ultimately recieved payment by the federal government for a $300 million dollars(in todays money) disaster solely of its own making?
What role did young Lt. Moore later play in driving Napoleon from Spain?
And on and on with many surprising twists and turns in a factually based historical novel, The Fort by Bernard Cornwell. After reading Cornwell previous gem, Agincourt some month ago, I praised his writing as some of the best of modern historical fiction. He lives up to that standard again in The Fort. If military history is your thing,  I would highly recommend this book without any reservation.