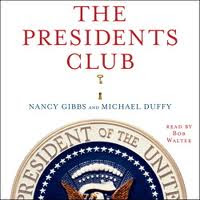 Once in a while our local librarian (and a former student) notifies me of the arrival of a new book she thinks I might enjoy. Thus I received a copy of The Presidents Club by Nancy Gibbs and Michael Duffy. It's one of the most exclusive clubs in the world, usually boasting only six or fewer members. This club has only one requirement for membership: having served as President of the of the United States. I must admit I was a little skeptical at first. Another Washington political potboiler filled with rumor, speculation about motives and unsubstantiated so-call "facts". Not at all. The Presidents Club is a clear and well-written glimpse into the modern presidency. It's worth reading and rereading for its behind-the-scenes insights.
It all began with Harry Truman bringing Herbert Hoover back from the limbo of being assigned the entire blame for the Great Depression. Hoover was given the job of unscrambling the bureaucratic logjam block food aid to a hungry and war torn Europe after World War II. This was exactly the same service he had successfully performed for President Wilson after World War II. A working relationship and even friendship ensued between the two men that in spite of future up and downs among future presidents set up pattern for the "club." The authors proceeded to explore how the relationships between former chief executives of often very different ideologies and politics have shaped history. I found these relationships sometimes petty and even distasteful but quite often inspiring. That was particularly so in these ideologically rigid and highly polarized times.
The sourest note in the whole book for me was to learn what a truely amoral, even immoral man, Richard Nixon proved to be. This relates to the story of Nixon's actions during the '68 presidential campaign, his successful effort to kill President Johnson's desperate hope for talks in Paris to end the Vietnam war in 1968. And Humphrey's well intentioned but mistaken decision not to publicly incriminate Nixon as a traitor to his country. The vicious block thrown by Nixon and his henchmen, including the go-between, Madame Chenault, prolonged the war for seven years. LBJ, knowing from secret wiretaps, that Nixon, through Chenault, was double dealing, phoned Nixon and appealed to him not to endanger the peace effort. "Oh no, Mr. President, said Nixon to LBJ, I would never do anything like that." Thousands more Americans died in Vietnam in the succeeding years.

Posted by troutbirder at 3:15 AM 7 comments:

Meanwhile, the big story was happening in Embarrass, MN (where else!), where a distraught woman brought her pet, a very limp duck – an Aflac look-a-like – into a veterinary surgeon.The vet laid the pet on the table, then pulled out his stethoscope and listened to the bird's chest.After a moment or two, the vet shook his head sadly and said, "I'm sorry, your duck has passed away."The distressed woman wailed, "Are you sure?""Yes, I am sure. The duck is dead," replied the vet."How can you be so sure?" she protested. "I mean you haven't done any testing on him or anything. He might just be in a coma or something."The vet rolled his eyes, turned around and left the room.He returned a few minutes later with a black Labrador Retriever.As the duck's owner looked on in amazement, the dog stood on his hind legs, put his front paws on the examination table and sniffed the duck from top to bottom.He then looked up at the vet with sad eyes and shook his head.The vet patted the dog on the head and took it out of the room.A few minutes later he returned with a cat. The cat jumped on the table and also delicately sniffed the bird from head to foot. The cat sat back on its haunches, shook its head, meowed softly and strolled out of the room. The vet looked at the woman and said, "I'm sorry, but as I said, this is most definitely, 100% certifiably, a dead duck." The vet turned to his computer terminal, hit a few keys and produced a bill, which he handed to the woman.The duck's owner, still in shock, took the bill. "$550!" she cried. "$1550! – just to tell me my duck is dead!" The vet shrugged, "I'm sorry. If you had just taken my word for it, the bill would have been $20, but with the Lab Report and the Cat Scan, it's now $1550."And that’s the way it is!

btw... I'm off to the Mayo Clinic next week for some tests. Maybe I should bring Baron and Simba.... :)
Posted by troutbirder at 5:11 AM 8 comments: