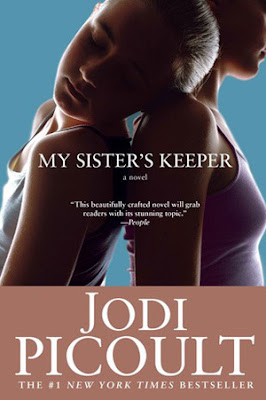 In recent years I’ve returned a bit to fiction and found Barbara Kingsolver and Jodi Picoult to be two new (to me) favorites. My most recent was Picoult’s My Sisters Keeper. I picked it out because I knew it was one of the authors most popular and had also been made into a movie.
It tells the story of 13-year-old Anna, who sues her parents for medical emancipation when she is expected to donate a kidney to her older sister Kate, who is dying from leukemia. Actually, she was conceived and genetically programed for this purpose and has been “donating” various fluids and bodily parts for some time. As young teenagers are sometimes wont to do she rebels and a family crises of the worst and most heart wrenching kind ensues. If you feel drawn to books involving serious ethical challenges this one’s for you. And I both loved and hated this book at the same time….
It was, after a good start,  way too  contrived and manipulative.  An unbelievably precocious teenager who hires a lawyer and cracks wise? The perfect father who take sides in a court hearing against his wifes’ judgment. She, the mother who risks all to save all. Even Judge Judy couldn’t make sense out of this soap opera. Yes, I was very conflicted about this book reading it anxiously to the very end…..

I don’t often reread fiction but historical fiction, especially the really good thick ones, provide occasional exceptions. For example  Coleen McCullough’s Caesar. It had been 26 years since I’d read the  first in her series Masters of Rome,  the epic story of the last years of the Roman Republic


It was while at Yale that she wrote her first two books. One of these, The Thorn Birds, became an international best seller that in 1983 was turned into one of the most watched television mini-series of all time. It was that TV series that eventually turned me to her novels of Rome.


Historical fiction at its very best. This goes for the whole series. McCullough brings it all to life: the characters, the politics, the battle scenes, the cultural dynamics...She does this by weaving in an amazing array of characters, major and minor, who ground every storyline. It is enough of a feat that she makes historical characters bristle with life and ancient events burst with excitement. It is even more impressive that she pulls this off while giving us a pretty serious history lesson. She often deviates from the main storyline to offer an anecdote or explanation concerning some arcane item such as the Bona Dea cult, or the function of the crossroads colleges. These sidebars are woven in seamlessly and the pacing doesn't suffer at all. Instead the whole story is enriched along with our appreciation of various facets of the historical context.  I just finished Caesar. Ok now I’m going to go back and read them all….: 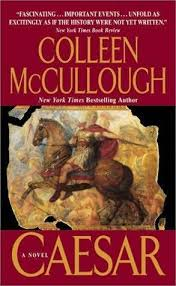 Posted by troutbirder at 3:31 PM 8 comments: 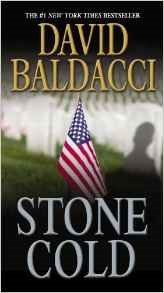 Stone Cold is a crime thriller written by David Baldacci. This is the third book to feature the Camel Club, a small group of Washington, D.C. civilian misfits led by "Oliver Stone", a former CIA trained assassin. One by one, men from Stone's shadowy past are turning up dead. To almost all who know him, Harry Finn is a doting father and loving husband who uses his skills behind the scenes to keep our nation safe. But the other face of Harry Finn is that of an unstoppable killer with his sights on Stone. As the Camel Club and Annabelle fight for their lives, the twists and turns whipsaw, leading to a finale that is as explosive as it is shattering. Definitely another Baldacci page turner…