The Girl In The Blue Beret.

You can’t judge a book by it’s cover they say, but I did. It showed a rain slicked city street somewhere in Europe. Possibly Paris, I thought. The cars were 1930's vintage for sure. It was twilight with a slight fog hanging in the air. The street lights were aglow and there were few people about. Still a young woman , wearing a coat and a dark beret was crossing the street. The whole scene was somber, mysterious even a bit frightening. Something about it all made me think of Anne Frank.......
Thus, I was drawn into readomg author Bobbie Ann Mason’s new novel, The Girl In The Blue Beret,
I was so glad I judged that cover...
It is the story of a recently widowed American pilot, Marshal Stone, who is forced into mandatory retirement at the age of sixty and wondering what to do with the rest of his life. He is the same man, who as a young bomber pilot crash landed in 1944, on a mission over German occupied France. Inspired by the experiences of her father-in-law, Mason tells a tale of war, love and survival in "The Girl in the Blue Beret" that alternates perfectly between World War II and modern Europe.
To the surprise of Marshall’s friends and family, he picks up and moves to Paris, intent on finding the ordinary people who hid him and led him safely out of France during the war after his B-17 crashed. Through his eyes, we meet members of the French Resistance who sacrificed greatly and often risked their lives to help downed airmen. We also learn about a cocksure young man slow to realize the high price of war to those who lived through it. 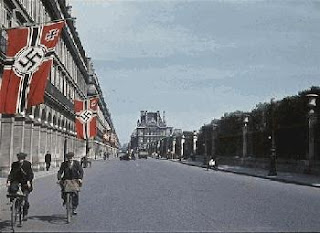 Mason's writing is exquisite. Not a single word is wasted or out of place, and she never drifts toward sentimentality — even in her descriptions of combat and the wreckage left behind. Her extensive knowledge of aircraft, combat and World War II is readily apparent, but isn't heavy-handed. Perhaps most impressive, though, is her ability to experience the world through a no-longer-middle-aged widower.
Filled with mystery, guilt and self doubt, courage, and romance, this book has it all. It shows people growing and changing, sometimes but not always for the better. How some stood up with courage under terrible circumstances. Not just another book about World War II, it will be the "quest" story you will never forget. I highly recommend it. 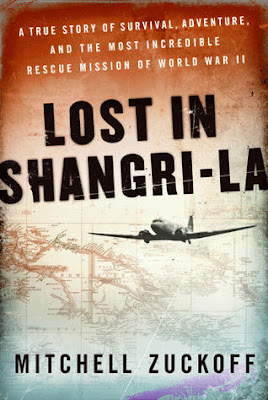 I love adventure/exploration/ survival stories. Needless to say, the newly published book Lost In Shangri-La fits those criterion exactly. One of the best of this genre I’ve read in a long time. From the New York Times Book Review
Picture of WAC Margaret Hastings

& New Guinea Tribesmen
By MICHAEL WASHBURN
Published: June 3, 2011
"Adventure" these days is merely an experience that allows for a modestly elevated number of variables — renting a car without a GPS unit, for instance, or visiting a friend in East Flatbush. Not that the world is denuded of excitement. It’s just that true adventure requires something that defies an itinerary: failure. Failure is the engine of adventure.

Mitchell Zuckoff’s "Lost in Shangri-La" delivers a feast of failures — of planning, of technology, of communication — that are resolved in a truly incredible adventure. Truly incredible? A cliché, yes, but Zuckoff’s tale is something a drunk stitches together from forgotten B movies and daydreams while clutching the bar. Zuckoff is no fabulist, though, and in this brisk book he narrates the tense yet peaceful five weeks during 1945 that three plane crash survivors spent immersed "in a world that time didn’t forget. Time never knew it existed." Even at the level of exposition, the book is breathless.
In the final days of World War II, 24 bored soldiers and members of the Women’s Army Corps embark on an aeronautic joy ride over a newly "discovered" landscape — known today as the Baliem Valley — in the dangerously isolated mountains of New Guinea, mountains populated by thousands of combative "cannibals," where "a lifetime of war was an inheritance every child could count on."
Perhaps owing to a lethal combination of foolishness and inexperience, the plane crashes, eventually killing all aboard but a beautiful Wac and two all-American G.I.’s. They are unreachable except by parachute — or plane crash — and surrounded by startled warrior tribes; a contingent of Filipino-American paratroopers joins the survivors to aid in their rescue. With no place to land an airplane, the mountain air too thin for heli­copters, and the threat of thousands of hostile Japanese soldiers hiding between the injured group and the sea, Army commanders decide on the most reasonable extraction: a cargo plane with a big hook. At this point, you should know if Zuckoff’s book appeals to you.
The pleasures — and values — of this story reside in admiration of fortitude in a vortex of treacherous circumstances. It is the 1940s, though, so primitive sexual politics — Margaret Hastings, the surviving Wac, is repeatedly praised for her unexpected "gumption," and the Army’s first airdrop includes food, blankets and lipstick — abounds, as does the lazy racism of "cockpit anthropoligists even after the New Guineans prove indispensable. Zuckoff doesn’t editorialize, probably because this is an adventure tale; insofar as nobody can confront ingrained gender bias or cultural chauvinism while looking across a clearing at a war-­painted, spear-wielding expeditionary force, the book’s vitality derives from a contagious sympathy with its subjects’ circumstances. But it’s a fine line.
Technicolor chivalry and cultural atavism aside, "Lost in Shangri-La" tells of the first contact between disoriented, combative cultures, one of the final first-contacts in human history. It’s a tale of bravery, loyalty, trust and silly, often frightening miscommunication. For example, white sky gods figure prominently in the local eschatology, and unbeknown to the Americans, tribal leaders greet their arrival as a prophecy fulfilled. While the Americans run swap meets, debates rage over whether to kill the whites to stall the apocalypse.
Ultimately, Zuckoff’s story is heartbreaking. From the moment the New Guineans choose to aid the stranded Americans, their culture is jerked forward into a callous, evangelizing modernity. Each day, the American forces receive an airdrop, often containing weapons and cowrie shells — used as currency — inadvertently introducing two hallmarks of the modern West: firearms and inflation. Today, Zuckoff writes, "elderly native men in penis gourds . . . charge a small fee to pose for photos, inserting boar tusks through passages in their nasal septums to look fierce. More often, they look lost." By the end of Zuckoff’s narrative, it’s clear that the Americans, however painful and anguishing the ordeal, were hardly victims. After all, they experienced the thrills of adventure. The New Guineans, by contrast, inherited a tragedy.

Posted by troutbirder at 8:44 AM 7 comments: 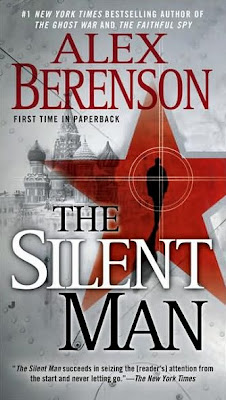 I’m not a big fan of the "thriller" genre. That’s not to say though that I would never ever pick one up when I’m scanning the new novel shelf of our local public library. Alex Berenson’s thriller The Silent Man caught my eye. I read it.
The radical militants of the Middle East want to get their national, religious and personal revenge against the Americans. Their plot is obtain the elements needed to build a nuclear weapon, smuggle it into America and explode the device in Washington, D.C. How might they bring off such a scheme? How might our government's agents stop them? Alex Berenson's third John Wells thriller pits his CIA superhero against just such a plot Here is where I usually have trouble with thrillers. The super hero part is usually so hokey. On that point this book was to thrillers what reality TV is reality. Popular drivel. I'd already seen James Bond in the movies. I will say this tale is well written though in a descriptive sense. Berenson strings his plot together well and his adjectives do grab ones attention. The really intriguing part is where the author provides a realistic, detailed account of how the terrorists swipe two decommisioned nuclear "gadgets" from a Russian military base and transport them to the United States. There they are taken apart to patch together a nuclear bomb that could work. This is the part that caught my attention. I kept wondering if this kind of information should be available at Barnes and Noble.

We know in the end that superhero John Wells will save the world from a nuclear holocaust. What we don’t know is how plausable is the "science" behind the plot. Can a couple of amateurs build a nuclear weapon with a little luck, the right material and the internet. I think I became more and more convinced as I read this sophisticated account of the nuclear plot that it was not so far fetched as I thought. . Thrillers are supposed to be scary. It was. And that's what made it worth reading. In the real world lets hope our intelligence agencies are more prepared and aware than they were on 9/11.
Posted by troutbirder at 5:10 PM 5 comments: 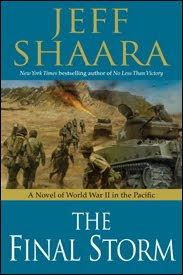 "War is hell."
William Tecumseh Sherman
Posted by troutbirder at 2:49 AM 3 comments: