Ole wants a job, but the foreman won't hire him until he passes a little math test.

Here is your first question, the foreman said. 'Without using numbers, represent the number 9.'

'Fair enough,' says the boss. 'Here's your second question. Use the same rules, but this time the number is 99.'

Ole stares into space for a while, then picks up the picture that he has just drawn and makes a smudge on each tree. 'Dar ya go.'

The boss scratches his head and says, 'How on earth do you get that to represent 99?'

The boss is getting worried that he's going to actually have to hire this Norwegian, so he says, 'All right, last question. Same rules again, but represent the number 100.'

Ole stares into space some more, then he picks up the picture again and makes a little mark at the base of each tree and says, 'Dar ya go. Von hundred.'

The boss looks at the attempt. 'You must be nuts if you think that represents a hundred!' 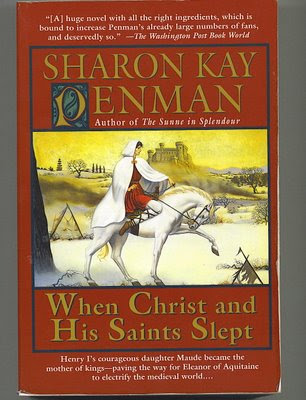 It was so bad the people said "Christ and His Saints Slept."It was in the 12th century, several generations after the Norman conquest, of England. Civil war raged across the land. Two people battled for the English Crown. One a man and most surprisingly, the other, a woman.
The woman was Maude, daughter of Henry I, who dies without a male heir. He annoints and trains his daughter for the job. She is smart, courageous and yes stubborn. The problem is many of the English barons (this is a feudal system) will not submit to a woman. Mauds cousin usurps the throne and the battle is on, as some of her barons and relatives remain loyal.
Never quite fullfilling her quest, she becomes the "mother" of kings. In effect, through the child she bore to the abusive Count Geoffrey of Breton, a son, the future Henry II, founds the Plantagenet Empire and dynasty. What a remarkable story. What a remarkable woman! I loved it.
This book is the first in a series of eventually to be four volumes, in author Sharon Kay Penman's "Eleanor of Aquitaine" series. If you like historical fiction this is a real good stuff. Penman combines excellent historical background knowledge with realistically drawn characterizations.
Posted by troutbirder at 3:22 PM 7 comments:

If the entering college class of 2013 had been more alert back in 1991 when most of them were born, they would now be experiencing a severe case of déjà vu. The headlines that year railed about government interventions, bailouts, bad loans, unemployment and greater regulation of the finance industry. The Tonight Show changed hosts for the first time in decades, and the nation asked “was Iraq worth a war?”


Each August since 1998, Beloit College has released the Beloit College Mindset List. It provides a look at the cultural touchstones that shape the lives of students entering college. It is the creation of Beloit’s Keefer Professor of the Humanities Tom McBride and Emeritus Public Affairs Director Ron Nief.  It is used around the world as the school year begins, as a reminder of the rapidly changing frame of reference for this new generation. It is widely reprinted and the Mindset List website at http://www.beloit.edu/mindset/ receives more than 300,000 hits annually.


As millions of students head off to college this fall, most will continue to experience the economic anxiety that marked their first two years of life just as it has marked their last two years of high school. Fears of the middle class--including their parents--about retirement and health care have been a part of their lives. Now however, they can turn to technology and text a friend: "Momdad still worried bout stocks. urs 2? PAW PCM".


Members of the class of 2013 won't be surprised when they can charge a latté on their cell phone and curl up in the corner to read a textbook on an electronic screen. The migration of once independent media—radio, TV, videos and CDs—to the computer has never amazed them. They have grown up in a politically correct universe in which multi-culturalism has been a given.  It is a world organized around globalization, with McDonald's everywhere on the planet. Carter and Reagan are as distant to them as Truman and Eisenhower were to their parents. Tattoos, once thought "lower class," are, to them, quite chic. Everybody knows the news before the evening news comes on.


Thus the class of 2013 heads off to college as tolerant, global, and technologically hip…and with another new host of The Tonight Show.

The Beloit College Mindset List for the Class of 2013


Most students entering college for the first time this fall were born in 1991.

Minnesota and the Civil War

A major new exhibit on Minnesota’s role in the Civil War began this summer at the Minnesota History Center in St. Paul.  We decided to take a look with out friends Gary and Rosie. It was more than a decade  ago now, when the multi-millionaire owners of the Twins and the Vikings were threatening to move their franchises unless public  funds were provided to build them new stadiums,  that our legislature chose instead to fund a new history center. I supported that decision not liking to be blackmailed into funding a private enterprise.  Recently new stadiums were built first for our State University and then partially  funding the Twins baseball park.    The beautiful history center remains a point of State pride to me. Looking out from the upper floor of The History Center toward our State Capitol. 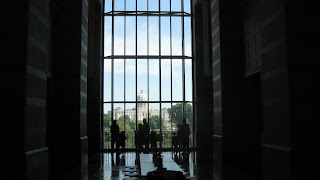 It is an interactive museum with both permanent and changing exhibits. It  hosts concerts, lectures, family days and other special events throughout the year. The building is also home to the Minnesota Historical Society library and archives, a research destination for schoolchildren, family historians and academics.


The intense divide between North and South in the 1850s—an explosive mixture of politics, beliefs, and economics—turned to war in 1861.
From a brand new state flush with patriotism, Minnesotans were the first in the Union to respond to the call to support the Union.  Romantic notions of battle quickly fled, even as perseverance in the face of unforeseen carnage sparked an enduring legacy. In family and friendship circles at home and on the battlefield, people mourned, made sacrifices and weighed every possibility and outcome. Minnesotans’ lives were changed forever. 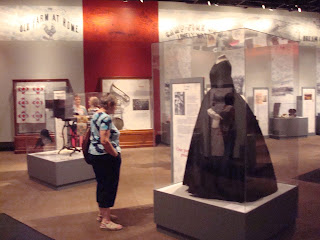 Here Mrs. T. checks out an exhibit on the role of women in the war. There were some 250 who actually fought. And knowing her attitudes on human slavery she could well have been one of them. 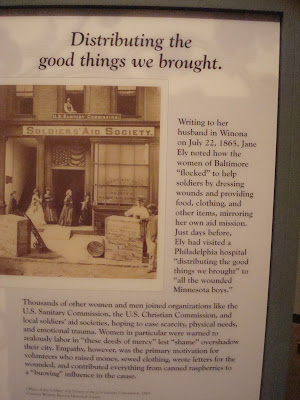 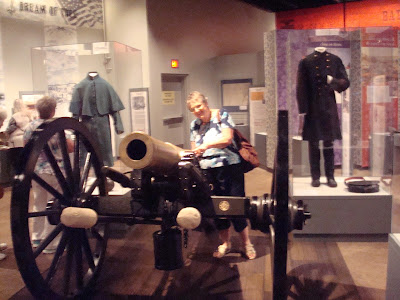 Posted by troutbirder at 2:48 AM 7 comments: 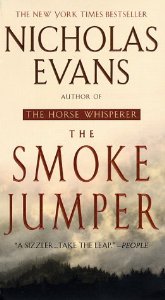 Yes, I’ve gotten somewhat away from my usual diet of history and biography lately. But what the heck it was summer and time for some novels with exotic locales, daring adventures, and romance. Take my latest The Smoke Jumper by Nicholas Evans .


The Bottom Line is  I enjoyed this book for its entertainment  value. It had  lots of action and really interesting settings.    I recommend it.


The Smoke Jumper was written basically in three Parts,  The first part sets the scene of a platonic love triangle who protagonist are two young “smoke jumpers" and a beautiful girl. The fact that their interactions were initially set in Western Montana won me over right away. Unfortunately the smoke jumping part, which I find quite fascinating is limited  to the opening chapters.


Part Two focuses on the tangled a tangled web of love and duty following deaths and injury from a major forest fire. It’s interesting but a little stilted and while the background is believable the events seem a little too pat.  Romance its not.  Its denial and moral dilemmas.


Part Three has lot of action in a civil war in  Uganda but to fit the plot  together   the story line stretches credulity.
I really did enjoy  the book. With only a few,  but really interesting characters,  it didn’t take too long to become involved in their fate.  A fun book to take along to the beach!