Conquest - The English Kingdom of France 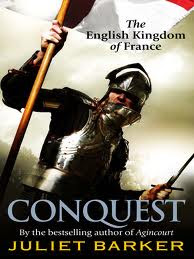 In the words of Juliet Barker the author of Conquest The English Kingdom of France.
Juliet says: "The most difficult thing about writing a book is usually finding the subject, especially after a major success like Agincourt. I had toyed with the idea of writing about Joan of Arc but my publishers said they wanted to know what happened after the battle of Agincourt and I realised I didn’t know myself. My knowledge of the period ended with Henry V so I was aware that he had invaded France a second time, conquered much of northern France and forced Charles VI to recognise him as his heir. After that, I realised I had only the vaguest notion of what had occurred. In fact I’m ashamed to admit that I thought the English were expelled from France as a result of Joan of Arc’s appearance on the scene. It was therefore a major revelation to me to discover that she was just a blip in the story of the English occupation which continued for another twenty years – twice as long as before her arrival.It was only after I began my research that I discovered that I was treading new ground: amazingly, there has never been a narrative history dedicated to the last thirty years of the Hundred Years War. This gave me a major headache in that I had to create a chronological structure out of a huge number of conflicting sources and I often found that I had to rewrite passages in the light of newly discovered information. On the other hand, I had a wealth of new material describing not just the epic battles and sieges but also the personal stories of those who defended the English kingdom of France and those who lived under occupation.What fascinated me – as with Agincourt – were these human stories which remind us that that these were real people no different to ourselves. The poor French girl Jehanette Roland, for instance, who fell in love with an English herald and was all set to marry him just at the point when Charles VII reconquered Paris: the new government forcibly intervened to separate them, insisting that marriage with the enemy could not be allowed. Or Robert Stafford who complained that it was impossible for him to defend his fortress since his sole gunner was absent, the only cannon was in need of repair and there was just one crossbow left in the armoury – and that had no string. In our own time there is a horrible familiarity in the plight of those on the ground, fighting and often giving their lives to defend the English kingdom of France whilst denied the men, money and equipment they needed by the politicians who had sent them there in the first place. Conquest tells an extraordinary story – and one that ought to be remembered." What the cover says: In her best-selling Agincourt, Juliet Barker gave us the definitive narrative of Henry V’s extraordinary victory over the French. Now, in Conquest, she tells the equally remarkable, but largely forgotten, story of the dramatic years when England ruled France at the point of a sword.
Troutbirder says.... "well done."
Posted by troutbirder at 7:42 AM 2 comments: 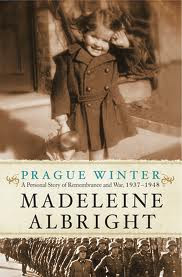 Former Secretary of State Madeliene Albright writes of her childhood, family and the tortured history of the land of her birth- The Czech Republic, in her new book Prague Winter. It was only recently that she found out that most of her relatives were killed in the Holocaust. Her parents, who escaped in the early phases of WWII,chose not to tell anyone of their Jewish ancestry...
I found this book to be the best personal memoir I had read in years.
Posted by troutbirder at 5:01 AM 6 comments: