In the beautiful Cottagewood garden memory care unit, where Mrs. T. now resides, nearby the gazebo where we were recently sitting, I found an unknown to me flowering vine. The flowers color  & structure were both stunning and unique. Take a look. (Photograph by  my friend at Cottagewood Autumn Kunz) 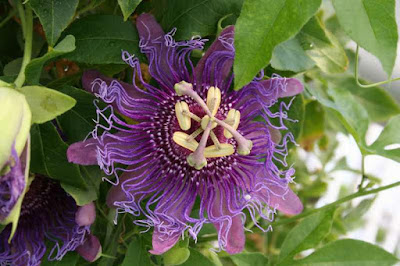 A bit later I met the lady who had originally  planted the passion vine as she began to water it.


In Patrick Jesse Pons-Worley book, The Passionfruit Cookbook, he writes, “Early explorers Spanish explorers  felt that the passion flower had a special purpose to promote the spiritual life among the people where it grew”
Then he goes on to explain the beautiful meaning of each part of the plant:


“The spiraled tendons of the plant, he notes, were taken as symbols of the lashes Christ endured, and the central flower column as the pillar of the scourging. The 72 radial filaments of the flower were seen as the crown of thorns; the three stigmas as symbols of the nails used in the crucifixion, as well as the holy Trinity; the five anthers, as the five wounds of Christ; and the style as the sponge doused in vinegar used to moisten Christ’s lips. Taken together, the five petals and five sepals were used to refer to the ten apostles who did not either betray or deny Christ. The fragrance of the flower, continued Pons-Worley, helped recall the spices used to embalm the body of Christ. Finally, its globular egg-size fruit was taken as a symbol of the world that Christ saved through his suffering.”
The vine had been planted along the garden fence in memory of her mother.  All she knew of it was the name and after some discussion I  said I would try to find out more about it to determine whether it was winter hardy Minnesota. The answer was mostly doubtful on the subject of winter survival, although with over 500 species of it worldwide, most of which are tropical plants, there might be a few exceptions. Thus volunteering, I apparently inherited the plant in the attempt to keep it alive  in our basement. I’ve managed  that in the past with orchid cactuses. Hopefully. next spring it will be returned to it present location in the memory care garden  to thrive and bloom once again bringing joy to all the memory care residence residents…
In summing up this perhaps quaint review the passion I had developed immediately upon first sight of a flowering vine, led me to a cookbook which was the first one I had ever purchased. Gardening, flowers, history, cooking (a new venture for me), religion etc. A good book for me. Perhaps you as we depending on you interests!