The Florist's Daughter by Patricia Hampl

I left this place (St. Paul) “a provincial capital of the middling sort” (in Gogol’s words), as a callow young teacher, never to return. Left it for a small rural crossroads, in Bluff Country, married there, raised a family and now live there in mostly contented retirement. Award winning author, Patricia Hampl, has remained in St. Paul all her life, rooted to the city of her birth in the “blameless middle” of America. Her latest memoir, The Florists Daughter, tells the intriguing story of her relationship with her parents, the city of her birth and her desire to escape it and them. It culminated with the realization, sitting by the bedside of her dying mother, as to why she chose to remain there all her life. The Florists Daughter was highly recommended to me by two dear friends. Partly, I'm sure, because there are many allusions to places I knew intimately, as a child growing up. For instance, as Hampl reflects on her life and the influences of parent and place on that life, she was sitting at the hospital beside her dying mother. It turns out to be the very hospital in which I was born.
I'm not very familiar with the genre "memoirs." So, perhaps, I was expecting a literary version of a "chick flick." Not to be. Hampl, who is a Professor of English Literature at my alma mater, the University of Minnesota, takes on far deeper issues. I suspect that is why the critics love her writing which also includes poetry and essays.
It's probably sacrilege to compare the fundamental premise of this book to a trashy novel like The Bridges of Madison County but it comes to mind. Francesca Johnson is a romantic stereotype of dreams and disillusionment. Patricia Hampl seems torn between two incompatible and unfathomable choices.  Yet both protagonists make the choice of what now are identified as "traditional values." Still, the Hampls  memoir is deeply rich into the self and human values.    That is surely  the difference between literature and trash. I liked this memoir a lot.

Posted by troutbirder at 4:16 PM 9 comments:

One Million Steps by Bing West 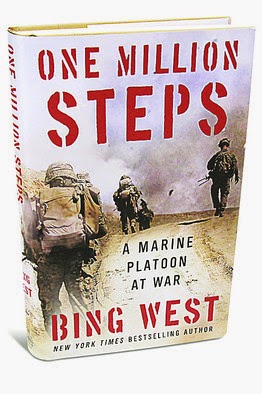 In the tranquil atmosphere of Daydream Cottage, on the Nature Coast of Westcentral Florida, I got lots of reading done along with dog hiking and birding. The first book was a most interesting, inspiring and yet troubling book by Bing West on Americans longest war – Afghanistan……
Battalion 3/5 suffered the highest number of casualties in the war in Afghanistan. This is the story of one platoon in that distinguished battalion.
Every day brought a new skirmish. Each footfall might trigger an IED. Half the Marines in 3rd Platoon didn’t make it intact to the end of the tour. One Million Steps is the story of the fifty brave men who faced these grim odds and refused to back down. Based on Bing West’s embeds with 3rd Platoon, as well as on their handwritten log, this is a gripping grunt’s-eye view of life on the front lines of America’s longest war.   Each time a leader was struck down, another rose up to take his place. How does one man instill courage in another? What welded these men together as firmly as steel plates?

West is at his best describing the tactical decisions of small-unit leaders. The opening chapters give a heart-pounding portrayal of the battalion’s brutal first month. . . . What makes these Marines so impressive is not that they are superhumans for whom danger and exhaustion are their natural habitat and killing a joy, but very young men for whom the prospect of walking 2.6 miles a day for six months over IED-riddled ground is no more appealing than it would be for anyone


Yet "One Million Steps," even as it focuses on the relentlessness of the Marines in Sangin, also offers a blistering assault on America's senior military leadership for purportedly adopting a new counterinsurgency approach that Mr. West depicts as a "quixotic strategy of a benevolent war," one that "replaced war with social evangelism" and is more "an exercise in civics" than a type of military strategy
Lambasting military leaders for turning American warriors into "community organizers" is attention-grabbing, but it isn't convincing. Neither the 2006 Counterinsurgency Field Manual, written by Gen. Petraeus and Gen. James Amos, nor an assessment of the COIN campaigns in Iraq and Afghanistan square with Mr. West's take. The two generals assert in the manual's preface that a "counterinsurgency campaign is . . . a mix of offensive, defensive, and stability operations," which hardly sounds like "an exercise in civics." Moreover, Gen. Petraeus's September 2007 report to Congress on the Iraq surge doesn't focus on schools but on "significant blows to Al Qaeda-Iraq.


In the end I’d rate the book A as a revelation of the what the war was like for our young Marines. And a D for strategy analysis.  Which seems about right considering how the Iraq conflict was botched from unnecessary beginning to end and The Afghan one wasn’t much better after it switched from rooting out the terrorists to “nation building.”  in tribal, ethnically and religiously divided place on the map.  What a disaster….

Posted by troutbirder at 3:00 PM 5 comments: