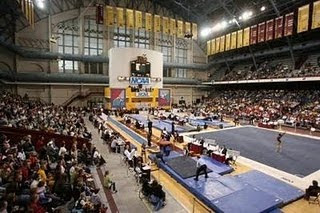 I reported, in the previous post, that we attended a University of Minnesota gymnastics meet, last weekend at the Sports Pavilion. Apparently, I missed the most newsworthy event taking place on that occasion, judging by the space given to it and the number of comments, on it, in the Minneapolis Star and Tribune.

The report was that a St. Thomas University Professor, U of M graduate and fervant fan, who was annoyed by the antics of "Goldy" the Gopher Team Mascot, punched him out twice, and knocked him over in front of a group of trailing, excited and then crying children. It seems that the rodent (who job is to entertain the fans, had done the old tap on someone’s shoulder on the left side, while sitting behind them on the right side trick. This was for laughs. Twice. Then Goldy got slugged. Twice. This response was because the professors "space" had been violated. The action apparently was in lieu of saying something profound like "don’t do that I don’t like it" or taking the matter to a nearby usher. Good grief. 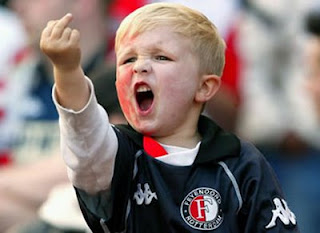 Now the amazing thing, to me, was the response of the many "commentators" to the newspapers article. That response was about even, as to who was to blame in this bizarre situation.
What a contentious, overly angry , society we live in these days.
The victim. No photograph was available of the perpetrator.... 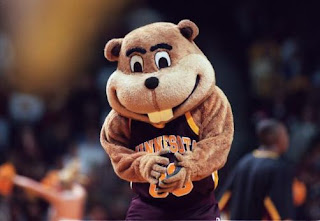 Posted by troutbirder at 9:07 AM

I'm sorry. I cannot believe people's reactions to minor incidents. And this was a professor? At a gymnastics meet? (Not hockey?) And who teaches toddlers to gesture such as this?

I'm headed outside to take a walk.

People never cease to amaze me.

People never cease to horrify me.

I would be on the pro-slugging side of that debate. If Goldy had gotten in my space and bugged me, I would have let him have it too.
My apologies Mr. T on the defeat of your Golden Gophers in the Big 10 b-ball tournament. It's been a rough year. I think Tubby may be looking for a new job.

Good grief, what is wrong with people? Are we that brittle that we explode at a simple touch?
The expression on that youngsters face reminds me of a skin head meeting.

Geez Louise, what's in the water these days? Prof Slug-The-Gopher needs an anger mgt class. I've also heard, though, about some venerable tradition of throwing dead gophers onto the court? Those darned Sioux fans...

What a bizarre story. You would think that a "Professor" would know better. I thought I was reading about a scene from the movie, "Anger Management". Very interesting

Goodness gracious....what's wrong with this professor? I think there's more mental illness out there than we're even aware of.