St Patrick Drives the Norwegians Out Of Ireland 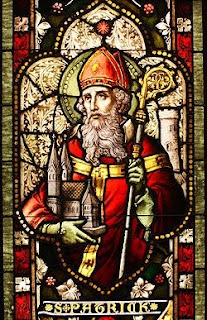 Now before you read the historical facts here.... remember as a Minnesotan I have nothing against the Norwegians (including my sainted mother).
Did you know the reason the Irish celebrate St. Patrick’s Day is because this is when St. Patrick drove the Norwegians out of Ireland. It seems that some centuries ago, many Norwegians came to Ireland to escape the bitterness of the Norwegian winter. Ireland was having a famine at the time, and food was scarce. The Norwegians were eating almost all the fish caught in the area, leaving the Irish with nothing to eat but potatoes.
St. Patrick,taking matters into his own hands, as most Irishmen do, decided the Norwegians had to go. Secretly, he organized the Irish IRATRION (Irish Republican Army to Rid Ireland of Norwegians) Irish members of IRATRION passed a law in Ireland that prohibited merchants from selling ice boxes or ice to the Norwegians, in hopes that their fish would spoil. This would force the Norwegians to flee to a colder climate where their fish would keep. Well, the fish spoiled, all right, but the Norwegians, as everyone knows today, thrive on spoiled fish.
So, faced with failure, the desperate Irishmen sneaked into the Norwegian fish storage caves in the dead of night and sprinkled the rotten fish with lye, hoping to poison the Norwegian invaders. But, as everyone knows, the Norwegians thought this only added to the flavor of the fish. They liked it so much they decided to call it "lutefisk", which is Norwegian for "luscious fish". Matters became even worse for the Irishmen when theNorwegians started taking over the Irish potato crop and making something called "lefse".
Poor St. Patrick was at his wit’s end, and finally on March 17th, he blew his top and told all the Norwegians to "GO TO HELL". So they all got in their boats and emigrated to Minnesota or the Dakotas —- the only other paradise on earth where smelly fish, old potatoes and plenty of cold weather can be found in abundance.
The End. 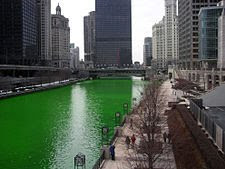 Posted by troutbirder at 3:27 AM

That is delightfully funny and so Keillor'esque. Loved this post.

Loved it. Very funny. Here I had it all wrong. I thought St.Patrick drove snakes out of Ireland - I guess those snakes were really Norwegians.

You made me laugh. I loved this. What a great sense of humor you have. You tell a story well.

Oh my, you got me and my wife laughing quite loudly. Thanks.

Thanks for the smiles ..cute story..I enjoyed it:)

That's hilarious, Ray! Sure beats the story of St Urho driving the locusts out of Finland (celebrated locally on St Paddy's eve).