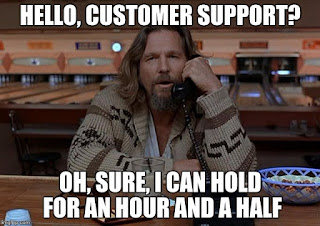 Oh sure. It's been a crummy day already. A State of Minnesota Department farmed out  Customer Service to a business in Denver, Colorado......ugly. :(

My all time unfavorite (besides the usual annoyances) was the time I bought a new computer which didn't work.  I called help and talked to "Fred" who happened to live in India and spoke the King's English. After an hour or so of trying to get my new computer to open he admitted it didn't work and he would send me another new one.  He needed my address. I gave him our P.O. Box Number. " I need your physical address," he stated.  The conversation which ensued for over an hour consisted of me trying to explain the meaning of Box Number and him demanding something called a physical address. Finally, understanding his problem I told him that Fillmore County, Minnesota was probably the last place on planet earth that didn't have street addressess....
Posted by troutbirder at 8:48 AM

The trials of not-so-helpful help lines.

Not the last place! When we lived in Basye, Virginia, we had a PO Box for mail because the postal service did not deliver to our mountain resort. UPS did, however, so we had a street address but it caused confusion because the street address was not in the postal service database so some vendors refused to ship to us because they could not confirm our address in their database. There were actually orders I was unable to place!