A Weapon of Mass Destruction?

As  revealed in a recent post, two of our male grandchildren from a warm State visited chilly Minnesota for a week. During one of our many outings, 4th grader Leonard revealed he was especially interested in rocks. Seems as though, I  told him, I happened to personally know an expert on the subject, my friend Gary, a.k.a. Mr. Science who taught Geology and Earth Science. 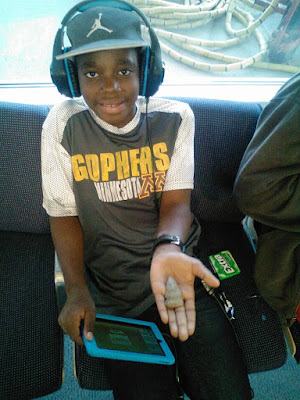 Of course, Gary was a collector of not only lots of rock but Indian artifacts as well. Walking our GSD Lily that afternoon, Leonard had found an interesting rock which he thought had a fossil embedded. Mr. Science identified it as Chert. Chert is a microcrystalline or cryptocrystalline sedimentary rock material composed of silicon dioxide (SiO2). It occurs as nodules, concretionary masses, and as layered deposits. Chert breaks with a conchoidal fracture, often producing very sharp edges. Early people took advantage of how chert breaks and used it to fashion cutting tools and weapons. The name "flint" is also used for this material. Gary presented Leonard with a genuine arrowhead from his own collection.
A few years earlier I had taken a somewhat larger role in instructing younger family members in Indian lore.  Showing Leonard some native wildflowers in my garden, we happened upon Canadian Bloodroot.  Naturally, an inevitable question arose. The sap of this beautiful spring wildflower was indeed red. Unfortunately upon showing the evidence I daubed some on the Grandchild while sharing a few stories of the warriors of the  Lakota Nation. It seems at least one female member of the family did not appreciate me "indoctrinating innocent youth in warlike virtues".  Indeed, I was properly chastised but one must admit they are beautiful flowers....:) 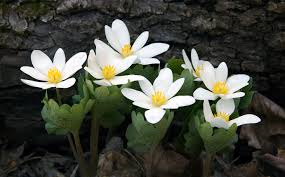 Posted by troutbirder at 5:19 PM

You have a great relationship with your grandson and you take advantage of teachable moments.

Nothing wrong with a bit of warpaint! We have chert artifacts here too.

I'm trying to figure out why she chastised you and not the warriors of the Lakota Nation.

It's hard to imagine beautiful wild flowers being in any way associated with war.

I think you did a fine thing for the boy. :)

A start of a journey in life, I like my rocks and treasure any that grab my attention.

Your so fortunate to have your grandsons visit. I get to see mine only once a year and I miss him terribly.
Bet they learn some pretty neat stuff from you.

You sure gave your grandson a neat and educational time. Glad you mentioned it was flint--that is more my grade level. Cool info about the Bloodroot. Bet he is going to have a fun "show and tell" when he gets back to warm state.

Kids are going to have questions ---and we DO need to answer them and not try to protect them.... IF you don't tell them about Bloodroot---they will hear it from someone else, and maybe what they hear won't be correct.... SO????? You are off the hook.

Neat that Gary gave Leonard a genuine arrowhead from his collection.... Love it!!!!!

Aw, gees...who's the buzzkill? I think it's great that you share this information with the kids. So much history is "white-washed" these days and I think our kids are missing out. I say, continue on with the lore!

Lin's comment is spot on...who's the buzzkill?! What a great moment to teach about culture and the use of natural plants. Nothing like a rock/nature lover. Sounds and looks like a great kid!

I got to spend two weeks with my grandchildren in Colorado in April. They are younger than yours and we don't yet have the kind of bond you have. I look forward to such lovely shared experiences. BTW, this looks like a possible book of interest to read: http://www.slate.com/articles/arts/books/2014/12/empire_of_cotton_a_global_history_by_sven_beckert_is_a_great_history_of.html

The flower sounds fascinating- even if it is a bit messy. That must have been fun for Leonard to see the arrowhead!