Not that anyone really wants to relive the invasion of  Iraq but if you missed the part about how it all went even more wrong after the initial misjudgment of doing it in the first place, Thomas E. Rick's #1 New York Times bestseller Fiasco says it all in the title. 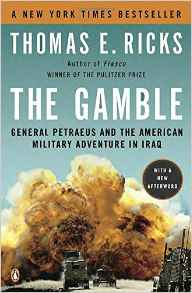 Next came his  book The Gamble which is the definitive account of the insurgency within the U.S. military that led to a radical shift in America's strategy. Based on unprecedented real-time access to the military's entire chain of command, Ricks examines the events that took place as the military was forced to reckon with itself, the surge was launched, and a very different war began. His stunning conclusion, stated in the last line of the book, is that "the events for which the Iraq war will be remembered probably have not yet happened."


This accurate prediction is evidenced in the  horrors emanating today in the daily news from the Middle East. When it comes to military matters Mr. Ricks is as good as it gets for journalism and analysis. He clearly shows us in these two books the devastating consequences of an ill- conceived and ill-planned war….

Probably a good view to explore.

I will look for this book. I think there's much more to tell about the mistakes made by fighting this war. There's still more to say about viet nam.

Can I hope for the day when war will be distant history? The world has changed so much in this century.

I thought Fiasco was so well written and informative. And frightening. Nice review.