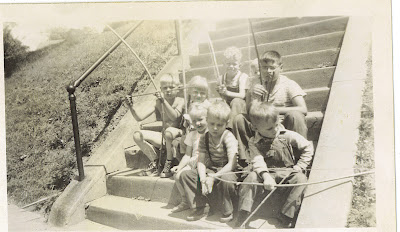 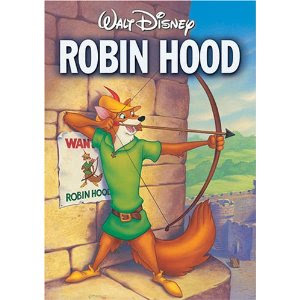 Now we see Robin, in this story, as a complicated hero. Who does or orders terrible things. Not to help the poor but to use them for his goal of regaining his upper class position. Of course, this is all done by touting the notion of justice for all. Good plan. Questionable movtives.
What to make of all this? Well it's a fun story, whose interesting characters, familiar, yet different, keep moving the story along in surprising ways. I’d recommend it to anyone who wants to see a newer, shall we say more historically realistic version , of a very old tale. Which gets me to what I didn’t like about it. I like my childhood heroes to be good and heroic. Not good and bad. I’ll leave the conflicted ones to the psychiatrists .
Posted by troutbirder at 4:16 AM

I am going to have to look for this book on audiotape!!
I have to admit I love that you chose the disney photo as that is my fave pic.
BTW thank you for being one of those who was brave enough to fight the big companies as I am one of those who had problems with what is now a black label drug. I hope my litigous remark didn't offend you. It was more intended at actions like when we sue a store for serving us hot coffee. UGGHH
Enjoying your blog!!

I enjoyed the Kevin Costner movie version of Robin Hood.

I love the real oldie with Errol Flynn as Robin Hood.

How fun your photo is! Do you realize that many kids today would never be allowed to play with such play things, nor would they be able to engage in the imaginative play that you did.

Thanks for the review of the book. Sounds interesting.

I like my heroes pure, not conflicted also. Reality we live with, heroes we strive for. Think I'll pass. Thanks for the review.

Love the picture of the gang. Thanks for the book review. I so need to get back to reading! Life gets complicated.

Walt Disney Robin Hood ~ still one of my most favorite cartoons of all times. Hmmmm..... now I feel like whistling the theme song.

Of course, the cute little Fox Robin is second only to Daffy Duck Robin Hood from Bugs Bunny.... a classic! ;)