This one. Elizabeth Tudor. The magnificent indomitable Queen Elizabeth I , who signed her personal notes E.T. Daughter of Henry the VIII and Anne Boleyn. She of the Spanish Armada & Mary Queen of Scots fame.

Historical novels are one of my favorite venues That is, if the book is well researched, historically accurate and written with a certain flair. Margaret George’s new best selling Elizabeth I meets these tests in every way. 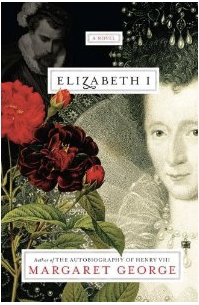 This is an account of the last thirty years of the queen’s life. Written in both Elizabeth’s voice and also that of her childhood nemesis, Lettice Knollys. It begins with her greatest test, the Spanish Armada..... Armadas really. We get to see the queen who rules and brings England into its golden age. More interesting yet, we meet the woman behind the carefully crafted image. The image she created for herself.
Her dreams and loves are real. The nation, which above all, she the Virgin Queen, wed herself to. The men she wisely surrounds herself with as supporters and advisors. And also a few men she unwisely uses and coddles. Such a woman at the heart of history faces constant crises. Always short of money she pawn her jewels to build armies and navies and feed a starving populace. Just another day at the office she deals with the Irish rebels, Spanish would be conquerors, stiff-necked Puritans and prejudiced Catholics.
There have been many biographies written of this, perhaps most the interesting woman in history.
When I looked at the back of the books jacket and saw it was recommended by Sharon Kay Penman, I knew it would be worth reading. Occasionally, I get dragged to a "chick flick" by my spouse and find I really enjoyed the story. I guess this book might be labeled "chick prose." It must be said the majority of the really good historical fiction authors are women and their main audience (judging by comments on reviews) are also women. Well, I’m always happy to join them. I do love history. And when an author can realistically bring people, behind the events, to life, something magical has happened. This book does that.
Posted by troutbirder at 3:58 AM

That sounds right up my alley. Thanks.

I am so excited to read this book. It was funny that you commented about it on my blog. I have had it since it's release but reading/concnetrating is still one of the side effects from my stroke. If you enjoyed this you absolutely must read her Autobiography of Henry VIII.
Out of curiosity, as it always amazes me, how did you stumble onto my blog?
I too am a huge English Royal Buff.

I'm not too much into English history, so I'll probably skip this one. Sounds good for those who like books about royals.

Ya gotta love a man that goes to a 'chick flick' with his sweetie! haha! Actually, my hubby watched both Queen Elizabeth movies with me, and The Other Boleyn Girl, and he watched The Tudors with me as well.

I love historical novels about royalty as well. Have you ever read 'Forever Amber'? It's one of my favorites!

I loved the Cate Blanchet as Elizabeth in the movie. This seems just the book to read in the wake of the royal wedding. It intrigued me that Elizabeth never married and was thus able to remain powerful.

Great review! I want to read it.