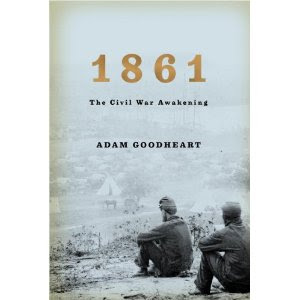 I just finished reading Adam Goodhearts best-selling 1861 The Civil War Awakening. Their have probably been more history books written about the Civil War than any other topic. I found this newly published book among the very best. It’s not about the well known Generals and battles. Instead, it focuses on a little known collection of heroes and events who helped bring about the changes in thought that were required to win the war and set the nation on a new course of freedom and equality. When it all began at Fort Sumter that course and the end result would have been unthinkable to the majority of Americans both North and South. It was all sustained in an ideal that previous generations had either forgotten or negotiated and compromised away. The secessionist traitors tried to justify there betrayal of democracy as a "2nd American Revolution." This was done against the principle of majority rule which is the cornerstone of a functioning democracy. And it was all done in the name of freedom and liberty for some but not all. This was the slavery justifier’s ultimate hypocrisy. How the mind set of the American people changed in the early days of the war makes for a gripping and original story. Today this story is more relevant than ever. It’s relevant when the governor of Texas and others speak of secession as if it were a viable alternative to federal law they don't like . President Andrew Jackson, a slave holder himself, responded to that notion when he said he would lead the army himself into South Carolina during the so-called "nullification crises." Nullification was the "state rights" idea that states could pick and chose which federal laws to follow. What came then, was thirty plus years of weak leadership & compromise after compromise. Then most disastrous war in American History. It was President Lincoln himself, who so eloquently pointed out on numerous occasions, that democracy itself depends on union and majority rule. Goodhearts book reminds us of this fact in countless ways. May it ever be so. Beautifully written and thoroughly original--quite unlike any other Civil War book out there. I highly recommend this wonderful book to all of those who love liberty thru democracy above anarchy and dissolution.
Posted by troutbirder at 5:46 AM

Thanks for the review - so many books, so little time. (Retirement beckons, but it's a couple of years off still)

When are you going to Yellowstone?!

I've read a lot of the civil war books out there. It was a horrible time in our history, but I still like reading about it. Being so close to Lincoln's roots here in Illinois encourages my reading too. Thanks for another great review and recommendation. I am just finishing up the last book you suggested - Pacific Glory. I don't need to read the bestseller lists for suggestions anymore - I have you doing a nice job for me. Thanks!

Really nice review and I will look for it. I don't read a lot of Civil War books but this sounds worth while. Thanks.

Thanks for the review. Sounds like a must read for us Civil War buffs. Eric and I think it sounds like a good one to put in our collection.

Terrific review. On a bike trip, along the Potomac, we did a tour of the Antietam battlefield. I was just astonished at the number of people who lost their lives just on that battlefield alone. I don't think many people are aware of just how devastating that war was to the population of our young country...

This one will go on my "to read" pile for certain. Thanks for the review.