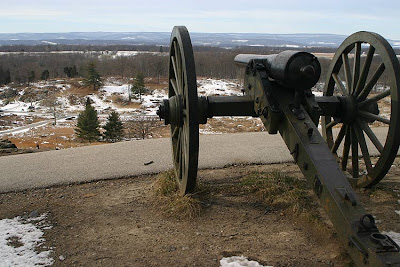 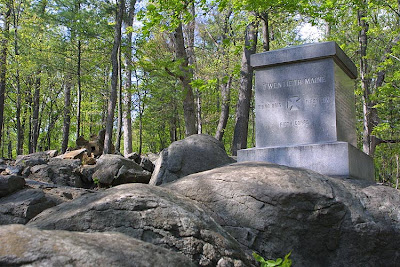 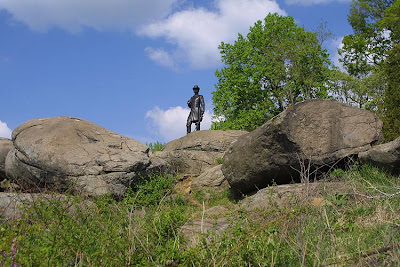 As one might expect, being a fairly steep climb, some and then more and more "soldiers" slowed down at the pace. Finally, only a few stalwarts were still running while their comades continued the slow trudge up the hill. Finally, three young men, all black, staggered to a halt right in front of us. Hands on hips, bent over gasping for air, they looked up at us, when I shouted at them, "WHO ARE YOU," I was,no doubt, expecting the name of their school. Straightening up with raised arms, they all shouted in unison, 'WE'RE THE REBELS." And perhaps that was their schools mascot or maybe in a moment of excitement and irony, they really were the rebels. We all smiled and congratulated them on their accomplishment.
Posted by troutbirder at 5:34 AM

Cute story, TB. You always manage to make me smile in the mornings.

As you know from the pictures on my blog, Little Round Top is my favorite place on earth to watch a sunset. My husband an I plan to live in G-burg sometime in the next 5 to 10 years. I'm sure that General GK Warren is very pleased to know that people from all over come to learn what happened there on July 2, 1863.

What a neat bit of impromptu reinactment. Love that shot of the lonely General standing on the hill.

Were you surprised by their response?
Good story and nice pics.

Neat story.
Finally taking a moment to catch up... where do you find the time?????
Really appreciated the story about Frances Perkins. The name rang a bell - but I did not remember much. A sad story going on in Maine. Well, Maine and quite a few other places. The world is scary.