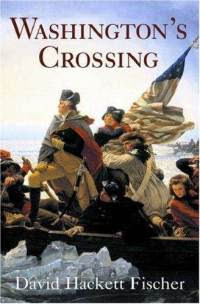 Just another book about the revolutionary war? Not really. Top gun historian David Hackett Fischer won the Pulitzer Prize for Washington’s Crossing. There must have been something special about it. There was.
Professor Fischer follows General Washington as he led the crossing of the iced Delaware River during Christmas 1776. On the surface, it seemed insane to cross to the other side to face an alleged much superior force of professional enemy soldiers. However, the author shows that the overwhelming odds were in reality not quite so insurmountable. During much of the year, the American rag tag army developed a new form of hit and run fighting. It was suited to the Americans capabilities and resources. It also lacked rigidity of the British troops and their Hessian mercenaries. Some myths that Professor Fischer debunks include the Hessians were not drunk, but bone weary from constant assault from guerillas and the weapon differential between the two forces was not even close to the legends
Thanks to modern computing and research methods, we know more about the past than ever before. This allows the best historians to present fresh insights in long ago events.
More importantly Washington's Crossing is a nonfiction book that reads like fiction. It represents the best of modern American history writing. Original, insightful, well researched , and best of all, so well written as to be what is called in the book trade, a page turner. Really!
Posted by troutbirder at 3:36 AM

Sounds interesting and I may give it a shot. I wonder how much of history that we take as gospel might not be.

Good post! I often wonder too, how much of history we believe just because we've read about it somewhere...This makes me think twice. Love that deer photo. Nicely composed shot of them in their natural surroundings.

Do you read constantly? ...how do you find time to do all the other things you do? Maybe your one of those guys who only sleeps 3-4 hours a night. I am jealous. I try reading and almost immediately fall asleep. I did read Neil Simmons "Rewrite" - that kept me awake but it take me over a week to finish.

As you can see I don't proof read my comments.

Wow - a Pulitzer prize. I've never heard of this author but I'd like to add this one to the reading list.

Yeah, I'll read that--Washington always been one of my heroes. If I discover he's not, I'll be sad. But only for a few minutes.

Sr Rose Gertrude's rendition of GW chopping down that cherry tree had BETTER BE TRUE, even if it was in the middle of an icy Delaware River

I find Washington (and Jefferson) to be fascinating historical figures. Mt. Vernon is one of my favorite places. I've not heard of this author, but will check him out. I do enjoy your book reviews. Also, meant to tell you earlier that I loved the story of the hamster rolling down the stairs and into the family fun.

My dad has tried to get me to read that, and I'm sure I will soon. It's also a fun place to visit (nicely preserved, and nice setting). I have family in the area who have gone to see reenactments on Christmas night...

Recommend "Unlikely Allies" - another look at the American Revolution, a very quick and thoroughly engrossing read.