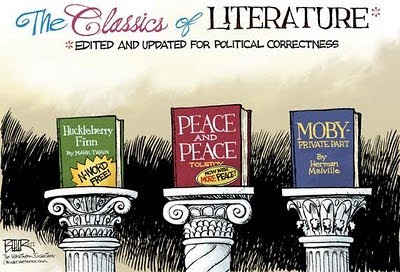 From Paul Carrier at The Walrus Said
"I suppose it was just a matter of time. Alan Gribben, a professor at Auburn University at Montgomery, has edited new editions of The Adventures of Tom Sawyer and Adventures of Huckleberry Finn that take out the nasty words. “Slave” is used in place of “nigger” and “Indian” is substituted for “Injun.”
Sacrilege (noun): gross irreverence toward a hallowed person, place, or thing.
Gribben argues that more Americans, including high-school students, will read Twain’s classics if offensive language is removed from them. Maybe he’s right. But if readers can’t cope with the language that Twain used then they should avoid his books instead of turning to sanitized versions compiled by someone who has the audacity to presume he can improve upon one of the greatest of all American writers."
As The New York Times said in a recent editorial:
"We are horrified, and we think most readers, textual purists or not, will be horrified too. The trouble isn’t merely adulterating Twain’s text. It’s also adulterating social, economic and linguistic history. Substituting the word “slave” makes it sound as though all the offense lies in the “n-word” and has nothing to do with the institution of slavery. Worse, it suggests that understanding the truth of the past corrupts modern readers, when, in fact, this new edition is busy corrupting the past."
When “Huckleberry Finn” was published, Mark Twain appended a note on his effort to reproduce “painstakingly” the dialects in the book, including several backwoods dialects and “the Missouri negro dialect.” What makes “Huckleberry Finn” so important in American literature isn’t just the story, it’s the richness, the detail, the unprecedented accuracy of its spoken language. There is no way to “clean up” Twain without doing irreparable harm to the truth of his work.
In its editorial, The Los Angeles Times acknowledged that Huckleberry Finn is right up there on the list of most-banned books in American schools, but the newspaper argued that “intelligent and sensitive discussion with students would be a better response” than altering Twain’s prose. The editorial continued:
"Twain's masterwork is a moving reflection of attitudes in the pre-Civil War South (and of its author's postwar sensibilities, which were ahead of their time with regard to race but behind our own). It's the struggle of a white youth, Huck, to reconcile his recognition of the humanity and equality of an escaped slave with the views of a society that considers him little better than an animal and uses epithets to describe him. The language, then, is very much part of the story and the history. Trying to protect students from the full ugliness of racism by softening that language does a disservice to them, and it's all too easy to imagine the crimes against literature that would result if this kind of thing caught on. We hope nobody gives Gribben a copy of Shakespeare's "Merchant of Venice," because the Bard's attitude toward Shylock the Jew was distastefully Elizabethan."
Posted by troutbirder at 7:18 AM

I'm so glad you called attention to this nonsense (and I love the cartoon!). I'd consider it revisionist history, thereby depriving sensitive (and other) students of important knowledge. The point is not to protect the young from distasteful realities, it's to teach them how to understand them!

P.S. I just posted something I think will interest you as you plan your next Florida trip!

Thanks for "reprinting" my post (for lack of a better verb)!

I love Twain, and I was appalled at this "cleanup" version.
Love the cartoon.