I read and reviewed Laura Hillenbrands smash bestseller, Unbroken, here several weeks ago. I was so impressed by that true and remarkable story of survival, I decided to go back ten years in time. Hillenbrands first success was another true story, this time about a super athlete..... a horse. Seabiscuit was under sized, unappreciated and an underdog, until a few men recognized his true worth and gave him the chance to be a champion. 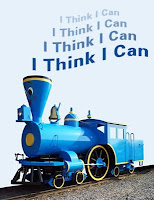 One little tidbit, in l938, this racehorse drew more headlines, articles and ink that Franklin Roosevelt and Adolph Hitler. If as a child you enjoyed " I think I can. I think I can. I think I can. I know I can." — Little Engine That Could , try this one for a grown up version.
Seabiscuit. Yes, I saw the movie ten years ago. The movie was good. The book is great. Including a description of the greatest race of all time - Seabiscuit versus War Admiral. I loved it
Here’s how famed sports writer Grantland Rice captured the race in his prose.
"The drama and melodrama of this match race, held before a record crowd keyed to the highest tension I have ever seen insport, set an all time mark.
You must get the picture from the start to absorb the thrill of this perfect autumn day over a perfect track. As the two thoroughbreds paraded to the post there was no emotional outburst. The big crowd was too full of tension, the type of tension that locks the human throat.
You looked at the odds flashed upon the mutual board–War Admiral, one to four, Seabiscuit two to one.Even those backing War Admiral, the great majority of the crowd, felt their pity for the son of Hard Tack and Swing On [Seabiscuit], who had come along the hard way and had churned up the dust of almost every track from the Great Lakes to the Gulf, from the Atlantic to the Pacific.
After two false starts,they were off. But it wasn’t the fast-flying War Admiral who took the lead.It was Seabiscuit, taking the whip from Woolf, who got the jump. It was Seabiscuit who had a full-length lead as they passed the first furlong. The Admiral’s supporters were dazed as the ‘Biscuit not only held this leadbut increased it to two lengths before they passed the first quarter.
The ‘Biscuit’ was moving along as smoothly as a southern breeze.And then the first roar of the big crowd swept over Maryland. The Admiral was moving up. Stride by stride, Man o’ War’s favorite offspring was closing up the open gap. You could hear the roar from thousands of throats“Here he comes, here he comes!”
And the Admiral was under full steam.He cut away a length.He cut away another length as they came to the half-mile post–and now theywere running head and head.The Admiral looked Seabiscuit in the eye at the three-quarters but Seabiscuit never got the look.He was too busy running with his shorter, faster stride.
For almost a half mile they ran as one horse, painted against the green, red and orange foliage of a Maryland countryside. They were neck and neck — head and head — nose and nose.
The great Admiral had thrown his challenge.You could see that he expected Seabiscuit to quit and curl up." .......
And then.... well, Hillenbrand tells the rest of the story. 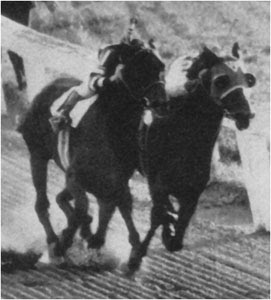 Posted by troutbirder at 4:34 PM

I read the book and saw the movie. Loved both of them. Seabiscuit is a great underdog (or perhaps it should be under-horse?) story.

I saw the movie and should read the book as I enjoyed Unbroken so much.
Seabiscuit gave the American people something to pull for in the doldrums of the depression. Perhaps we need another one now.

After your positive review of "Unbroken" I bought it and am reading it now. I also bought Seabiscuit at the same time. Looks like we are on the same wave link when it comes to the type of books we like. I have not been disappointed in Unbroken. It is an excellent book.

Thanks for sharing this review--I love racehorse stories, though I've only seen the ponies live a few times while visiting friends at Saratoga. So many great racehorse songs, too, from Molly & Tenbrooks (here's a nice Stanley Bros version http://www.imdb.com/title/tt0261558/) to Stewball (Joan Baez at http://www.youtube.com/watch?v=6LqMh4hhP2U).

I loved this book too.

I picked up this book years ago at my grandmother's house - it is a wonderful, wonderful book. I haven't seen the movie. If I love a book I rarely get around to the movies, they seem to ruin things