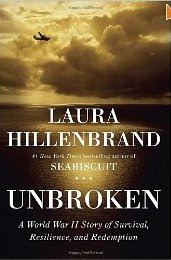 Unbroken by Laura Hillenbrand is the best, most fascinating, narrative biographical history, I’ve read in a long time. It belongs to the "survivor" story category and while true, it’s as such stories often are, almost unbelievable.
While largely confined to her home, due to chronic fatigue syndrome, the author researches the life story of Louis Zamperini. This is mostly done by telephone.

Zamperini is a child with, what today would be identified, as a serious psychological problem. Today, in school, that would require medication. In my day, it would have been identified as "ants in his pants," later evolving into juvenile delinquency. Growing up poor, in California, he is somewhat rescued by a compassionate older brother and a growing interest in track. He sets all kind of running records in high school and at U.S.C. Goes on to participate in the 1936 Olympics in Berlin. Is caught up in WWII as a bombardier, shot down in the Pacific, endures a 2000 mile odyssey on a life raft before being captured, imprisoned and tortured relentlessly by the Japanese. And that's only half of it.
Hillenbrand is really good at this sort of thing, as she proved in her best selling horse story Seabiscuit. I must add the characterization of Zamperini lacks a whole lot of depth. The psychological part that is. Then, a few details are definitely questionable. So it’s not perfect. Still this is, as I said, the most fascinating story I’ve read in a long time. I highly recommend it. 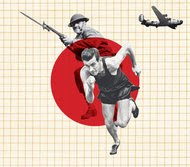 Posted by troutbirder at 3:53 AM

I've been looking for something new to read and this seems like something I would like to add to my Kindle reading list. Thanks for the review.

I totally agree. It was a wonderful book and brought home the plight of men who survive wars and how they have to readjust to civilian life. Many don't make it and we still do not provide proper support. Louis was an amazing survivor, in war and out.

My husband is reading this next. And, is looking forward to it. My friend also told me that is it a very worthwhile read.

I loved her first book, Seabiscuit, and this one looks interesting from your review. I read quite an excerpt featuring sharks and attacking planes on a sinking life raft. I was a bit concerned that the book might come across as Japan bashing so didn’t buy it. Was it?