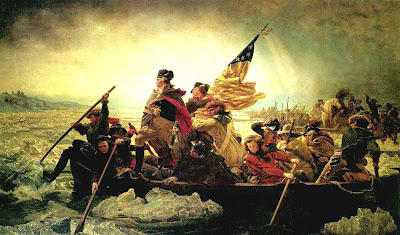 No, not George, even though he is the hero of this book!

The man who did everything but stand on his head (Newt Gingrich) to get Bill Clinton impeached for messing around with a "aide" is now a successful writer of historical fiction. Of course, Newt, the disgraced former Speaker of the House of Representatives, was busy playing the same game as Bubba about the same time. Along with his co partner William R Forstchen, a college Professor of History, he recently wrote To Try Men’s Souls and against my better judgment I just finished reading it.
It might have had something to do with the fact that my free book supplier had sent me an email telling me that she had the new book Unbroken by Laura Hillenbrand on hand and ready for me to pick up. Knowing that I love historical fiction, she tossed in a couple of Gingrich potboilers for good measure. Now not wishing to seem ungrateful by refusing the later books, on the grounds that the author was a jerk as well as a hypocrite, I gracefully accepted all three. So here goes.
If you can skip the long and gratuitously propagandist, not too subtle introduction, it’s not too bad. The book seems basically accurate in its depiction of the desperate lunge across the Delaware to attack the Hessians at Trenton. The characters, actual and imagined, like Washington, seems to speak their lines in an appropriate manner. The waning chances of a revolutionary army, defeated and without supplies clearly come through. Some of the scenes wander off into other venues but don’t seriously hamper the story.
Now, if only a tiny, but determined group of present dayTea tax hating patriots, can overcome the slackers, disloyalists, Congressional criminals, alien fascist communists and those who have forgotten the true ideals of Freedom, Liberty and elite democracy, while ignoring the existence of slavery.....things will turn out just fine. Oh wait a minute those were the not too subtle innuendos of the Introduction. As I said, except for that, the story was not too bad. I’d give it a C+.

Posted by troutbirder at 5:56 AM

Doubt I will give Newt a whirl even for the sake of George. However, I know you will love Unbroken---excellent A+.

My husband is starting, Unbroken. I hear it is excellent. I am a bit surprised that Newt's book is actually this good. lol

I'm sorry to say I couldn't bring myself to buy it even if you gave it A+.