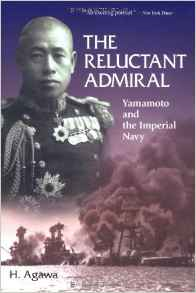 Sometimes you just stumble on an obscure book and pick it up. Thus was the case at my bargain book stop recently…. The Goodwill.  It was The Reluctant Admiral. It is the story of both an individual and an organization. The individual is Admiral Yamamoto, the architect of the Pearl Harbor raid and commander of the Combined Fleet until his dramatic death in the South Pacific. One of the best-known Japanese wartime leaders -- complex, tough, sympathetic, and realistic -- he believed from the start that Japan was bound to lose the war. The organization is the Imperial Navy, whose gentlemanly traditions and international outlook contrasted strongly with those of the army. Based on interviews with people who knew him well, private and intimate correspondence, and secret and official documents, it is -- as the New Yorker said -- a "brilliant" book. Fascinating is how I would describe it but then I'm a military history junkie and the book surely wasn't a "best seller". My only critique would be lots of unfamiliar names that were hard to keep track of. Still the basic story brings a subject clearly to light...:)
Posted by troutbirder at 7:37 AM

hard to pronounce some of those names let alone keep track of all.Sounds like a good read to me

Interesting. I just finished a wonderful read called, "In the Garden of the Beasts." Have you read it? You would really like it. It is about our ambassador to Germany in 1933 and 1934. Very fascinating. And, I could keep track of the names. ;)

It does sound very good, Trout. I love Goodwill shops, it is so much fun to see the treasures that can be found in them. :)

Thanks for reviewing something unusual Mr T.

If we ever get beat in a war hopefully it will be by an English speaking country. On the other hand maybe that's why we won. "Pearl Harbor? You idiot. I said to attack Pearl Bailey." Did the book go into that at all?

Thanks for supporting Goodwill. Some of the people they hire are people no one else will.

We recently watched a movie about Admiral Yamamoto. He seemed like a very intelligent man.

This really sounds interesting. I am always curious reading and learning about the lives of the "enemy". What were their beliefs, motivations, family life, etc? The names might prove difficult however.

(Let's try this again) Sounds like a very interesting read. I love historical non-fiction (and fiction) and it's always a pleasure to stumble upon a good book in the bargain shelves. I was in a Petosky, MI bookstore while on vacation and picked up 3 interesting used-book historical fiction/non-fiction finds: Ken Follet's "World Without End", Doris Kearns Goodwin's "The Bully Pulpit" and Bruce Feiler's "Where God Was Born". All were less than $6 each. Now if ony I could find the time to read each of them.... Stacked they measure 5 1/2" of reading.

I'm going to have to see if I can find this. It sounds fascinating.