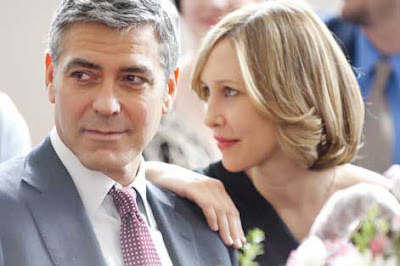 Posted by troutbirder at 5:38 AM

I'd have stuck with that bird book, lol...

Since I like the occasional chick flick, I'm curious to know Mrs. T's view. Did she enjoy it? It doesn't sound like another "Sleepless In Seattle" but I probably shouldn't trust a man's judgment in this genre (my apologies, TB).

I've read a lot about this movie. From your description, I'm not sure I'd like it, but hey, it has George Clooney. That's a big plus.

We don't go to movies - after we've watched that same movie when it comes out on TV, we're usually glad we didn't waste our money going to the actual movie! (funny or not)

We rarely go to the movies either, and I often find that the ones the critic "rave" about, leave me feeling exactly as you did. What?

A friend warned me that this movie wasn't the romantic comedy or the chick flick that it seemed to be. Guess we won't waste the money or time.

Thanks for your comments on my blog...always glad to hear from someone who has enjoyed the carousel. It's been a real labor of love.

Who cares what the heck the movie was all about? It was George Clooney! I'd give him an academy award for just standing there... :)