April 27th, l992
Greeting from Fairbanks! This is the last day you shall hear from me Wayne. Arrived here two day ago. It was very difficult to catch rides in the Yukon Territory. But I finally got here.
Please return all mail I receive to the sender. It might be a very long time before I return South. It this adventure proves fatal and you don’t ever hear from me again I want you to know you’re a great man. I now walk into the wild.
Alex
Postcard received by Wayne Westerberg
in Carthage, South Dakota
Quoted from Jon Krakauer’s book Into The Wild 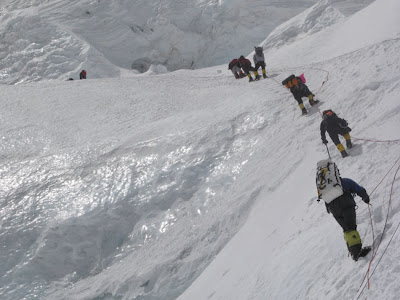 Historian? Investigative reporter? Jon Krakauer writes intriguing and most often controversial books with flair and style. There are almost always mysteries surrounding the facts and his interpretations of them. They also become best sellers that other people write or film rebuttals about. I first ran across his writing about a mountaineering disaster on Mount Everest. I had seen an Imax film on the subject and numerous television documentaries, then I read his book into Into Thin Air. It was an astonishingly evocative book. You felt you were at 28,000 feet gasping for air and your very survival. Krakauer pulled no punches putting the blame for all the deaths where he felt it belonged. Some people felt he tweaked the facts to make a more interesting story. Hmmm. 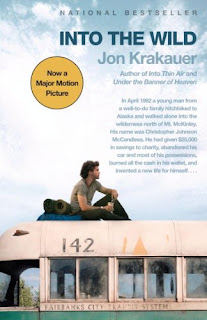 Other books followed including Under the Banner of Heaven. This was an account of the past and present history of the Mormon Church focusing particularly upon the practice of polygamy and two dissident brothers who murdered in the name of their religious beliefs. The Mormon Church officials did not approve of Krakauers’s interpretation.
Another best seller was Where Men Win Glory an account of the life and death of Pat Tillman, who left a career in the National Football League to serve in the war in Iraq. The real truth of his death was not revealed by the U.S. government.

I just finished reading Into The Wild. A young college graduate leaves his well to do family and becomes Alex Supertramp. He gives up his money and family and becomes a wanderer. He eventually intends to spend a summer, living off the land, in the Alaskan wilderness. And he dies there. Why? What actually happened? Reading the story it was easy enough to brush off the whole thing as the mistakes of a stupid, selfish and naive young man. But not really. I found much empathy for the psychological depths that the author turns up, much of it based on his own youth and experiences.
Krakauers books are about life on the edge. They never disappoint me because they make one think about some of the bigger questions of our lives. And then you wonder if they are nonfiction fiction. That’s part of the mystery.
Posted by troutbirder at 4:12 AM

Into the Wild and Into Thin Air were exciting but difficult books to read... because I knew the outcome. But what writing!

Wow! I think I'd have to have a lot of food, drink and a warm blanket before I settled into one of these! Thanks for the intriguing post!

I agree with your perception...I found Alex to be one of the truly alive. Into the Wild is one of my favorite reads...it beckons us to delve deeper perhaps than we care to. My heart goes out to his family though, heart breaking end to a wild wondering wanderer.