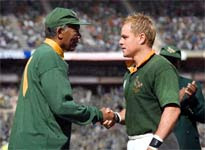 I highly recommend this movie.
Posted by troutbirder at 3:49 AM

Thanks for the review. It sounds like a great movie. Yes it is nice to be wrong at times. This was one of those for sure.

I had heard about the movie, but had no idea what Invictus was or meant. Thank you for sharing this. It's a great post and a beautiful poem!

Nice review. It's good to know what's worth seeing, and this sounds like it would be.

I just saw this movie yesterday amid an ice storm.

Definitely worth the slip-sliding drive home.

Rugby has to be the best game, even if I am sort of an All Black fan.