Not a review of William Kent Krueger's Sulfur Springs 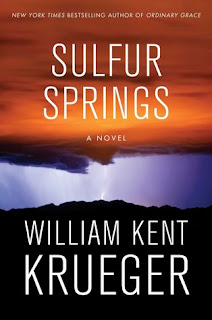 William Kent Krueger is one of my favorite Minnesota authors. There are many such authors, both male and female, who write in diverse genres, usually set in Minnesota. As you know, when a book is placed in a location that you’re familiar with, it helps to bring it alive.  Krueger basically writes detective stories.  The background is often in Minnesota's forested lake country, known as Boundary Waters Canoe Area, Lake Superior or the nearby towns of the Iron Range. In Sulfur Springs Cork O'Connor, Krueger's protagonist and former Sheriff, has a new wife named Rainy.  She is an Ojibwe.  Cork is partly Indian and mostly Irish. In Sulfur Springs, Rainy’s son calls from Arizona and tells his mom that he has murdered someone, mentions one name and the phone goes dead. Cork, now retired from the detective business, and Rainy rush off to Arizona to help. There they encounter an environment far different from the lakes and woods of northern Minnesota. In this alien environment they find out that her missing son is part of a group(Coyotes) who try to rescue refugees from Guatemala fleeing from wars and extreme poverty, all to seek refuge in America.   These families are often left to die waterless and lost in the desert by scammers who take their money and abandon them. Blocking their way, besides the desert, are the beginnings of real walls and barbed wire, border patrols and vigilantes.  Besides the vigilantes, there are also the drug traffickers who all have their own reasons for building higher walls, or in the case of the vigilantes and the drug traffickers, killing people. In plain English, the refugees are people crossing through a war zone. The story inside this  Krueger's mystery is a tragedy writ large in the place far away from Minnesota. This issue divides our country ever further between the red and blue states of America.


I recently met William Kent Krueger in our town library. The taxpayers of Minnesota passed a legacy amendment referendum raising our state taxes for protection of the environment as well as cultural and art support. Mr. Krueger has visited a number of town libraries because of that referendum. I arrived at the Spring Valley's public library early to speak to our librarian and her aides when through the door the famous New York Times best-selling author arrived to set up for his presentation. I greeted him and we spoke for about 10 minutes. We compared a few notes on both of our living at one point in St. Paul, and I said at the end of his presentation I was going to ask him a question. He then said I should ask him now, and I'm glad I did because after his presentation he was surrounded by fans and people clamoring to buy his most recent yet unpublished book.  I said something like this, "Surely you had to know that you would get bad reviews and comments and perhaps even threats for writing about refugees crossing from Mexico into the United States in Sulfur Springs? His answer in a nutshell was to nod his head and say ‘Yes.’ ‘Why,’ I asked and he explained. I can't remember his exact words, but they were what I wanted to hear. He cared. It was an issue that touched him deeply and he needed to write this book. And he did.


His actual presentation, at least for the first half, was quite a surprise. He never mentioned his own books but talked about libraries and books and their great influence on all of us in our early childhood. There were many parents and grandparents in the audience so he spoke of how those early books that our parents read to us had a powerful influence on us for the rest of our lives.  He explained and reviewed the impact of Dr. Seuss and  other authors like him. The audience even could mimic his words as they anticipated his punchlines. The audience was enthralled. Later he talked about his books and his experiences and how he wrote and what was coming and answered all the questions that his fans wanted to hear about. I didn't ask any more questions and when I left ahead of the crowd, I thank the taxpayers of Minnesota for making this special evening possible and William Kent Krueger for being there. And since then I've finished reading all his books and can tell you, if you love a good detective story, now you'll know where to find quite a few. 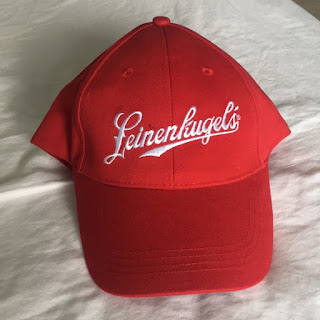 Cork O'Connor, the hero of many of Krueger's books has  a favorite beer. I hate to say it's brewed in. But it’s my favorite as well. The brewery is in in Chippewa Falls, Wisconsin. Some years ago I bought a Lienies hat at the brewery and wore it for more than a decade till it recently fell all apart. It was white and red so I won't try to Trump or change anything about this not a review but plainly the books references to refugees and walls might seem out of today's headlines. But what I'm concerned about today is getting a new red and white hat and I've located several.  So I could drive over to Wisconsin and get a new one or perhaps the following might example might serve just as well and so here is perhaps even better alternative. The colors are right though it doesn't say make America great again. I remember reading Orwell's 1984 when I was in high school in the 1950s. The literary reference to that book  might just as well apply today. What you think? 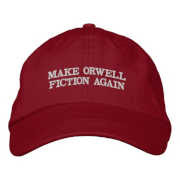 Love the hat, just hope people don's assume it is a MAGA hat. Am off to my digital library to find that book. Thanks.

'great hat! At least where you live there is something good to write about.

I am glad to hear of his answer for writing the book. The world needs brave people to speak truth.

What a wonderful "not review"! I love that you got to chat with the author and ask your question before the presentation. I love that this author cares. All in all, sounds like a great author library visit and a great book. Thank you for reviewing! Oh, and nice hat!

Ordinary Grace, written a few years back, is one of my favorite books. He sounds like someone I would travel to hear.

That novel sounds eerily close to nonfiction. You definitely need that Orwell hat! Funny because it's tragically true.

I read 1984 in junior high. It all seemed so impossible then, now dystopian society has become more of the norm. It was great you were able to meet the author in such a personal way before the crowds arrived. I'll look up the book to get more information. Thanks for the review. - Margy

Fantastic Orwell hat! I used to have a red baseball cap for occasionally brightening up a photo, but I gave it to charity because I don't want to be seen with a red cap.

Thanks, that sounds like a good one. Will look for it.

I found Boundary Waters on Libby, and listened to it with great pleasure while doing kitchen chores. So now I have a new favourite detective. Will look out for other volumes. I often thought about you and your journey with Barb while listening. Wishing you strength, your love and devotion is an inspiration.