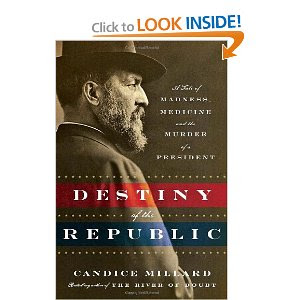 He was born in poverty, in a log cabin, on the American frontier. Through hard work, and a wonderful ability to educate himself, courage and an expansive personality he rose to be President of the United States. No. No. It wasn’t Abe. His name was James Garfield. He was from Ohio and was our second president to be assassinated.
Candace Millard has written a wonderful description of an aspect of the age which saw the transition from the end of Reconstruction to modern America. Her book Destiny of the Republic - A Story of Madness, Medicine and the Murder of a President tells the story of a little known President, cut off like John Kennedy, in the prime of his life. It was a time of great corruption in government, "robber barons" and the solidification of segregation as part of southern institutions and thinking.
The most interesting part of the book is the story of how a man shot in the back with what should have been non mortal wounds was basically killed by his doctors.
Over a period of about 11 weeks the President was repeatedly probed into his wounds with unsterilized fingers and instruments as the doctors tried to find the bullet lodged in his body. This all at a time when the world famous French doctor, Joseph Lister, had been demonstrating for years how his theories on the prevention of infection could save lives and limbs. The famous American inventor, Alexander Graham Bell also worked furiously to develop a machine which could locate the bullet. All to no avail.
Millard, whose previous book The River of Doubt was about Theodore Roosevelt’s near-fatal journey of exploration in South America, is again perfect in bring these people and events to life. This book of narrative history ranks right up there with others like The Devil in the White City as a classic of its type. I highly recommend it.
Posted by troutbirder at 9:00 AM

Hi Troutbirder ... certainly sounds like an interesting book - but those were the days when having everything clean and sterile wasn't yet obviously apparent to our/his health. Thanks for the suggestions - cheers Hilary

Now there's a president we don't hear about except for his death. Sounds like an interesting read.

Your presidents certainly provide interesting blog topics but thank goodness there are authors who will keep history alive.

Sounds like an interesting read about a little known man. I didn't know he lived so long after the shot. Somehow that president got skipped over in my history classes.

Other than being assinated, I know nothing about Garfield. So sad that history of our nation is only told by what is popular. JFK aand modern presidents are written about in hundreds of books and thousands of articles. Movies are also made to keep many myths alive. .

Glad to know a more obscure president has a good biography like this. He wasn't the only one to be killed by his doctors...as I remember, Washington was bled to death by physicians.