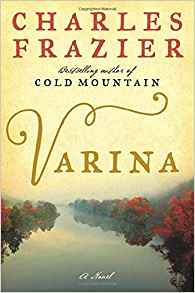 
Whether its history, biography or historical fiction the devastation of the American Civil War is widely read and known about but not always and not about  everyone who was there.  Charles Frazier, author of best seller Cold Mountain, takes us back to those awful days and introduces us to a teenage girl who lived surrounded by the people, events and consequences of that awful war.


Her name is Varina Howell.  With a financially reckless father she agrees to wed the much-older widower Jefferson Davis, perhaps giving her stability and the ability to help her parents. Davis is a wealthy Mississippi planter and slaveholder.   Davis pursue politics and Varina find herself in Washington  where he husband is a key figure as a Congressman and leading figure in several administrations.


Davis is eventually appointed president of the Confederacy, putting Varina in the middle of things. For Civil War “buffs” the details of the war as seen thru Varinas life  will likely not reveal much that is new. It is her life, experiences and thoughts that grab the reader.  The Confederacy falling, her marriage in tatters,  her rescue of a black child being beaten on the street of Richmond, later raising that boy with her own children is only the beginning. Later she and her children escape Richmond and travel south on their own, now fugitives with “bounties on their heads, an entire nation in pursuit.” This is the story of  one woman’s tragic life and is epic in its breadth and intimacy.


Because her twilight years were more interesting to Frazier, he decided against using a traditional biographical approach to tell Davis’ story. This bothered me at first. I like and need chronology to keep track of things in any story. I’ll let the author explain in his own words…


“I decided early on that I didn’t want the structure to be based on the calendar,” he said. “I wanted it to be based on memory and association. I wanted that back and forth, push and pull, jumping through time.”To reveal her tale, Frazier drew on a real person from her past. During the last year of the war, the Davis family took in a young mixed-race boy and raised him with their children. That boy, known as Jimmy Limber, was taken away when the family was captured by Union soldiers as they tried to flee to Cuba. He never saw Varina Davis again. And his fate remains a mystery. For his  novel, “Varina,” Frazier creates James Blake, the adult version of that boy. Blake, who is a teacher, becomes the book’s driving force as he tracks Davis down and pushes her to help him understand his past.


The book’s chapters alternate between the two adults and Davis’ life in New York and flashbacks that reveal her childhood, her marriage and particularly the harrowing journey she and her children took as they fled Richmond after the Confederacy collapsed. The narrative jumping around can be frustrating at first but in the end the reader realizes that this is an exploration of  Varinas memories, her feeling of complicity and realizations of the moral depravity of slavery and it consequences in her own life.


Having previously read and reviewed the story of the Grimke sisters (The Invention of Wings by Sue Monk Kid   ) this book was an interesting counterpoint.  Varina is a feminist in her own right. She is conflicted. She made  tough choices. And most interestingly was and is still denigrated by those who wish her husbands cause had prevailed….This is a most fascinating and revealing novel/ biography. I highly recommend it.....

Well, I have read the Invention of Wings and did like that... :) You always find such interesting books to review! And I noticed this book was just recently published. Thanks for reviewing!

I must catch up with the reading. I'm still trying to finish one before starting the last book you reviewed. No rush though, it's not going to run away! As for this weeks review, it sounds like another must-have.

I agree with you that a chronological account is a much easier read, but this sounds like such an interesting story and worth he effort.

Big fan of COLD MOUNTAIN. I will look for this.

I often wonder with historical books how the author decides between biography/nonfiction vs historical fiction. I really should read one of Frazer's novels, but I'll probably go with Cold Mountain. Still, Varina sounds like an interesting character.

This was a part of history I had zero knowledge of. Sounds like a really interesting read. Can't help but wonder what really happened to Jimmy. Thanks Ray.

Varina does sound like an interesting read, Ray, despite the "back and forth" method. Years ago when I was in Mississippi, my friends and I stopped to tour the Davis home. Wish I'd known more about Varina then.

I was a history major in college and one of my three areas of emphasis was the Civil War (interestingly the other two were the history of Mexico and the High Middle Ages - guess I'm an eclectic sort of person). I remember getting engrossed back in the library stacks reading bound compilations of military letters written during the war. I was searching for information about the Pony Express, but got so side tracked following the communications that I had trouble getting my own research done. - Margy

Hi Troutbirder ... sounds interesting - about an era I know little of ... so I'll keep it in mind - perhaps the library ...cheers Hilary

While some may feel that those were simpler times, they had their own set of problems too. Sounds like a good book. Thanks for reviewing!

Dear Troutbirder, thank you for this review. When I was a teen-ager, maybe back in 1952 or '53, I read the life of Varina Davis. I can't remember the name of the book, but she did intrigue me then. Missouri--where I grew up--was a Southern state and in the 1950s still really felt that the wrong side had won the Civil War--or as we were taught to say, "The War Between the States." I can remember the cover of that book and the fact that she came across as a real Southern lady--which in Missouri was a high compliment.

It would be interesting to read it again and then read Frazier's biographical novel and compare the two after so many years have passed and much new thought has been given to the war and slavery. (Many Missourians in the 19th century were slave owners.)

This sounds like a fascinating book. Thanks for bringing it to my attention.

Interesting review. I once read a much earlier bio of her, one written for young adults. It told me quite a bit about Jeff Davis and did not say much about the age difference or her possible motivations. I’ve been to the place where Old Jeff was imprisoned, and his wife was credited with getting him released. I consider him a traitor more than most of his subordinates but I felt sorry for what Varina went through.