Bogged down a bit in my reading, I thought I'd come up with a few of my favorite poems.  It's not going to be a top ten list of any kind. Just a few of those poems which I remember well because at a certain point in my life they had influence and meaning to me personally.  I'll start with Percy Bysshe Shelly and Ozymandias. 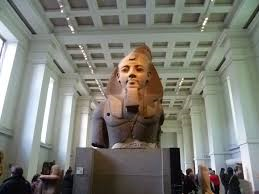 I met a traveller from an antique land


Who said: Two vast and trunkless legs of stone


Stand in the desert. Near them on the sand,


Half sunk, a shatter'd visage lies, whose frown


And wrinkled lip and sneer of cold command


Tell that its sculptor well those passions read


Which yet survive, stamp'd on these lifeless things,


The hand that mock'd them and the heart that fed.


And on the pedestal these words appear:


"My name is Ozymandias, king of kings:


Look on my works, ye Mighty, and despair!"


Nothing beside remains: round the decay


Of that colossal wreck, boundless and bare,


The lone and level sands stretch far away.

I  met Ozymandias  accidentally at a public meeting sitting next to me in the audience. He did have a commanding voice and arrogant sneer,  particularly at the end of the meeting  when he made threats and promises  about the manner and substance of the meetings purpose. Appalled,  I chose to ignore him for several years as he took command of the empire in which I played a small part.
Some time later as my co-workers and other community members grew increasingly unhappy and in some cases frightened, a few began to stand up. I joined them to do what I could to help.

Ozymandias is actually the ancient Greek term for Ramses II mightiest of Egypt's pharaoh's.  Perhaps his broken statue residing now in the British museum may find a kindred spirit now residing (except on weekends) in Washington D.C.  My hope remains the same now as when I first met  that spirit those many years ago ....we shall see a decayed wreck boundless and bare whose political arrogance has come  to its inevitable end :)

Yes we can hope.

I like the way you put the poem together with present day politics.

Interesting and expressive.
I would like to visit the British Museum to see his broken statue.

That is a poem I taught for many years kn British Lit classes. Your hope for the future of our Ozymandias is the same as mine. The sooner, the better!

Seems apropos to the times.

Dear Troutbirder, I have always loved poetry and memorized much of what I studied in high school and college. But unlike you, I did not see with this poem that it matched someone in my life. You are so bull's eye right when you match it with many of those now in Washington. Thank you for seeing this likeness and sharing it. Peace be to you.

I remember being impressed with that poem back in high school, and that was a long time ago! Yes, arrogance is an achilles heel.