A Rose For A Crown


A KING MISUNDERSTOOD BY HISTORY,


A LOVE STORY THAT HAS NEVER BEEN TOLD 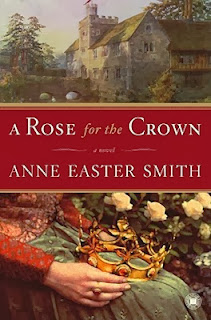 Well, that’s what the blurb said.  And some thirty plus female reviewers on a historical novel web site mostly agreed.  Apparently, of late, I’ve been reading the book equivalents of “chick flicks.”  I can live with that….


I just finished  A Rose for the Crown, by Anne Easter Smith. She take to task  the Tudor Dynasty’s well known hack Shakespeare, who is  roundly rebutted for trashing Richard The Thirds reputation. Seen through the eyes of the woman who was the mother of his illegitimate children, a woman who loved him for who he really was, he comes off as not such a bad fellow As the mistress,  Kate Haute,  moves from her peasant roots to the luxurious palaces of England,  a remarkable story ensues.


The bare bones of this novel is historically accurate but our heroine is fictional because though the King had  three illegitimate children,  history is doesn’t tell us who their mother was. Thus Katherine Haute is fictional, but the world she lives in is not. The story is set in the time of the War of the Roses.  As any good story the reader is drawn into interactions of the main characters and the time and place they lived in. For my part I found the tale quite fascinating. Another book quite well done on this era is   is Sharon Kay Penman’s Sunne in Splendour.  Actually,  I think I may have become addicted to it….
Posted by troutbirder at 5:31 AM

I have enjoyed several novels from this time period. One was a mystery that seemed as though it would become a serial, but I lost track of the author.

Speaking of "chick flicks" I just finished reading the first of the Maisie Dobbs series, could be considered chick flick, but included a storyline on the Great War, too.
A lighter, quick, read with it's seriousness, too, that transported me to another time & place.
Overall, I enjoyed it and look forward to reading the next!

The Starz TV series called "The White Queen" just recently ended with the death of Richard at Bosworth. The series was based on several books by Philippa Gregory. It appears that period is just as popular as the reign of Henry VIII.
I'm wondering when we will find out if Richard's recently unearthed skeleton will show he was deformed as Shakespeare depicted.

I haven't read this book either. Perhaps I'll be able to do a little more reading now that I've had cataract surgery!