'Blood and Beauty: The Borgias,' by Sarah Dunant 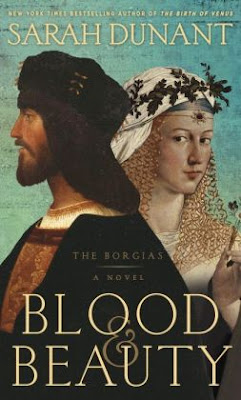 Oh my what a collection of vices and desires. Lust, ambition and corruption, passion and the power of the church and state all wrapped inside fortune born and obtained.  The Borgias are arguably the most intriguing and ruthless family in all of history. They make the Tudors look like choirboys.


Still according to the Sarah Dunant, “more than many in history, the Borgias have suffered from an excess of bad press. While their behavior – personnal and political- was often brutal and corrupt, they lived in brutal and corrupt times: and the thirst for diplomatic gossips and scandal, along with undoubted prejudice against their Spanish nationality, played its part in embellishing what was already a colorful story. Once the slander was abroad, much of I was incorporated into the historical record without being challenged. Spin, it seems, was a political art long before the modern word was introduced.”


In the five centuries since Rodrigo Borgia’s death in 1503, his family name has become synonymous with poison, incest and violent intrigue, and has inspired a host of biographies, paintings, operas, novels, movies and television dramas. In “Blood and Beauty,” Dunant follows the path set by Hilary Mantel (one of my favorite writers of historical fiction) with “Wolf Hall” and “Bring Up the Bodies.” Just as Mantel humanized and, to an extent, rehabilitated the brilliant, villainous Thomas Cromwell and the court of Henry VIII, Dunant transforms the blackhearted Borgias and the conniving courtiers and cardinals of Renaissance Europe into fully rounded characters, brimming with life and lust. Here they provoke, if not exactly empathy, then a new understanding, grounded in the context of their brutal times.


One of the problems that confront any writer of historical fiction is how to portray the actual person as characters, which is to say, to portray them as people. Non-fiction treatments of history do not deal with the emotions of the major players of any event, (perhaps) rightfully arguing that emotion clouds objectivity, and though history cannot be truly and completely objective, there must at least be an attempt to be so as much as possible. Historical fiction, however, must treat historical figures in a far more different manner: as realistic and believable characters, whose reasons for making the decision that they do, making the choices that they do, likely lie in a far more complex web of emotions, motives, and relationships.


Take the plunge into the European Renaissance of high art,  saints and sinners and Machiavellian politics.  You could well be appalled at what you find……. but never bored.

I watched the recently cancelled Showtime series called The Borgias.
It raised some questions in my mind so I googled the topic and learned that much of the plot was fiction. As usual, they telescoped time and made composite characters and created story lines out of whole cloth. It did make for interesting viewing however. It was a really fascinating period of history.

So many good books - so little time and I'm retired! I need to retire from retirement.

I have not read that - I saw where there was a series called The Borgias too, but never watched. We don't get Showtime, but may not have watched it anyway. Sounds fascinating though!

I saw this, picked it up to read, and then put it down again. I was intrigued by the book. I still am. I will put it on the list. Thanks.

I have read small bits about the Borgias, but since I haven't read Wolf Hall yet, I will find a copy of that and stick with the Tudors for a while. Find the Borgias at another time, spinning away!

I've heard good things about this book. Great review! I could see my husband (a fan of Mantel) enjoying Blood & Beauty.

I've enjoyed various Henry VIII movies and books, but not the Borgias. There was a recent serial on TV, but it didn't interest me. Neither did the Henry VIII serial.

sounds fabulous! I go to the beach next week, this is title is coming with me :)