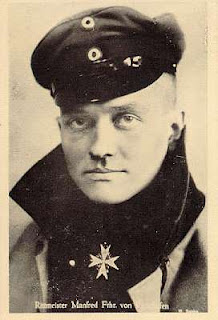 I'm wondering, is your wife standing astride the Baron or is she forcefully trying to restrain him?

Poor Baron. I can just imagine those pesky cats thumbing their paws just outside his boundary.

Now that old pesky song is an earworm. "Snoopy and the Red Baron." Thanks a lot.

Ha, ha. I've read about the Red Baron, and always enjoyed Snoopy's adventures as a fighter pilot. Your Baron sounds like perhaps the most fierce territory defender of all! Cats and squirrels, beware.

Love the story. Baron is a great protector.

I never read about the real Red Baron. There's a peanuts film coming out so maybe you and the baron can go see it together!

I live in the town where the guy who allegedly shot down the Red Baron hailed from: Arthur Roy Brown aka Billy Bishop.

Baron has a job to do! I am sure he patrols his area diligently..by the way those Hydrangeas are lovely:)

I love that snowball bush. At least that is what we call them. I had one once and decided to move it and killed it. That was the last of anything like your bush. I did get a nice Hydrangea a couple of years ago and it did fine for two years and this year we had a drought and a heat wave that killed about half of the bush, and that in spite of my watering it. So, the other day I cut it all off short and cut out the dead wood and there are still a couple of leaves on it. I am hoping it will snap out of it come the spring of 2013.

I enjoyed your post about the German ace and Snoopy.

Hi! I was wondering if you would be interested in reviewing my latest book, The Faith of St. Nick. I so enjoy your take on all the books you review and would be thrilled to have you read mine! If you are interested please send me an email at annnichols3@gmail.com and I will send a copy out to you!Thanks!
Ann

I'll have you know
that I love those historians/writers
you mentioned .....

now let me get back
to my reading over your site here!