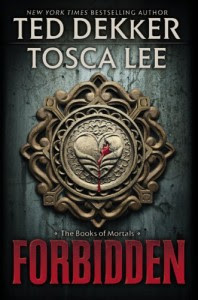 I’ve usually been somewhat of an omnivorous reader. Though, for fun, I used to read mostly fiction... from classical to best sellers on into the 70's. Fantasy and science fiction & thrillers were read but only rarely. At some point, I decided that the best American writers were doing history and biography. The following book doesn’t follow my usual reading habits....
Imagine a world, our world, where every person on the planet is dead and doesn’t know it. Not zombies according to the current literary fad, but rather a planet populated by people who are but shells of what they were created to be. A people devoid of all emotion with the exception of one fear.
Bestselling author Ted Dekker and co-author Tosca Lee conjure up just such a world in Forbidden, a dystopian novel which will appeal to some and horrify others. .. Dekker’s vivid imagination and at times almost maniacal focus on darkness and light coupled with Tosca Lee’s eloquence of prose is captivating Using interesting characters, the plot slowly builds to a riveting ending. The king where even if you favorite football team is on the tube it’s impossible to put the book down in the last hundred pages.
The book begins with
"In the year 2005, geneticists discovered the human gene that controlled both innate and learned forms of fear. It was called Stathmin, or Oncoprotein 18. Within 15 years, genetic influencers for all primary emotions were similarly identified.
Nearly a decade later, in the wake of catastrophic war that destroyed much of civilization, humanity vowed to forsake all that had conspired to destroy it. Out of the ashes rose a new world in which both the advanced technologies and the passionate emotions that led to its ruin were eliminated. A world without hatred, without malice, without sorrow, without anger. The only emotion genetically allowed to survive was fear. For 480 years, perfect peace reigned. Until now."
For some reason, I can’t quite fathom, Dekkers books have been wildly popular with some of those readers who favor "Christian" books. Other in the same category roundly condemn his writing. It may have something to do with ones take on current politics. Is it really about the dangers of "big government" or even worse "world government". Perhaps. But I’ve already read Orwells 1984. I suspect the devotees of Ayn Rand will find it fulfilling. For me, it's the dangers of science and technology used in defiance of humanity that is quite enough.

Posted by troutbirder at 5:27 PM

This certainly sounds like an interesting book, but not one I would ever read. I admire your ability to read a wide range of genres. I tend to be stuck to reading only a few genres.

Well, I love Ayn Rand. And, I read stuff like this 'cause it scares me on two levels. The second level is how - after I read such books - I read online medical journals that say they're close to accomplishing the same freaky thing that scared me when I thought it was just 'good fiction.'

It sounds a bit like it's outside my usual interests, but since it was also unusual for you I might give it a try.

I find it hard to believe that ANY book couldn't be put aside for the Packer game... Undefeated Packers ...better statistics than when we had Brett What's-his-name. You know? The one who went to the Vikings?