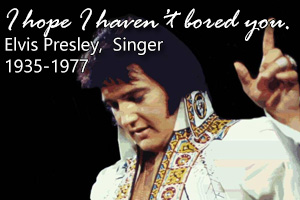 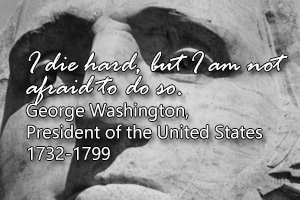 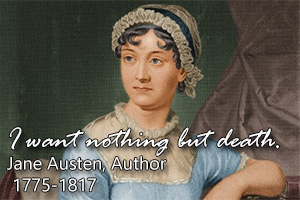 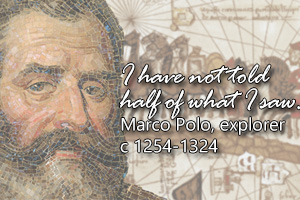 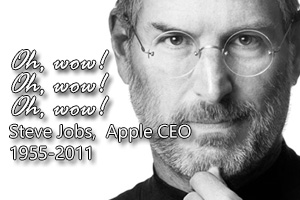 Posted by troutbirder at 4:32 AM 9 comments:

The World Turned Upside Down

“Listen to me and you shall hear, news hath not been this thousand year:


Since Herod, Caesar, and many more, you never heard the like before.


Old Christmas is kicked out of Tow


Yet let's be content, and the times lament, you see the world turn'd upside down.”


Oliver Cromwell had banned the old Christmas celebrations at the end of the English Civil War as being too frivolous. The opening lines of a then popular ditty set the tone of protest against this religious fanaticism. Later, some say, the same song was played at another type of ceremony in a small, almost destroyed town, in the New World - Yorktown Virginia. 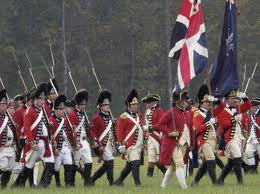 A British army was trapped and bombarded to distraction by American and French land and naval forces. In spite of victory after victory by the British, the Americans would not give up their struggle for Independence. Now the time had come for the Redcoat army to pay the piper.


A young man had been Washington's aide de camp for years. He yearned to lead men into battle. Finally he got his chance. Here pictured Alexander Hamilton Troutbirder leads the charge against British redoubt #10 in a daring nighttime attack. (Photo by Mrs. T.) 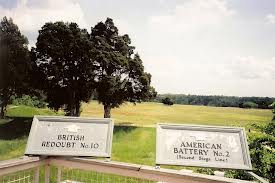 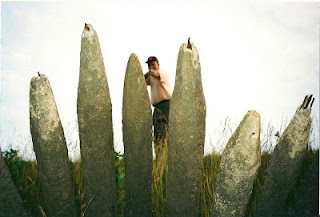 Unable to avoid destruction or escape, Lord Cornwallis surrendered his army. Except for Canada, the sun sets on the British Empire in North America. 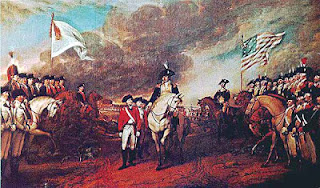 It is said when the surrender ceremony takes place, the British army band plays an old song called The World Turned Upside Down. Don't just read history. Live it! Well..... at least in your imagination.


A favorite book of Troutbirders is: - Washington: The Indispensable Man by James Thomas Flexner. It is one of the greatest biographies in American literature.
Posted by troutbirder at 8:25 AM 2 comments: 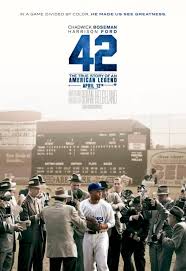 We saw 42 last week the Jackie Robinson story.  It brought me back to the days when my dad took me to see the St. Paul Saints at Lexington ballpark. My Dad was a huge baseball fan and followed the sport very closely. The Saints and also Montreal were the Brooklyn  Dodgers Triple A farm teams. Robinson played briefly for Montreal before being brought up by manager Branch Rickey to the Dodgers where he was  the first black American to plays in the “majors.”  I followed the Brooklyn team as well for many players on the Saints team were eventually  promoted to the Dodgers.  In those days the world series was a really big deal and we were allowed to listen to the games in our elementary classrooms.


Jackie Robinson in baseball and Doak Walker, a college football All American,  were my sports heroes.  Pro football had not yet become Americas favorite game.  It would eventually  replace baseball, which  then was regarded as our national pastime.  I remain loyal to baseball to the present day and have little or no interest in any other professional sports.
42 was a great movie which  brings to forefront the courageous struggle Robinson had against the bigotry and overt racism of his time. Dodger General Manager Branch Ricky (played by Harrison Ford) sought and young college graduate and star athlete to break the color barrier. Jackie Robinson  proved to fit the bill. That is strong enough to not fight back against the abuse and yet able to prove by his skill that he belonged.   For younger generations,  the portrayal of some of that abuse in the film will probably seem quite shocking.  For others of us it will be sadly remindful of the racism  we probably saw and heard in growing up. 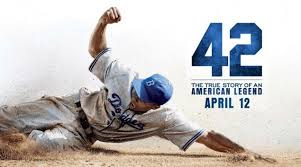 The Years of Lyndon Johnson is a biography of Lyndon B. Johnson by the  writer Robert Caro. Four volumes have been published, running to more than 3,000 pages in total, detailing Johnson's early life, education, and political career. A fifth volume will deal with the bulk of Johnson's presidency.


I just finished  the  fourth volume, in The Passage of Power, Caro covers Johnson's life from 1958 to 1964, the challenges Johnson faced upon his assumption of the presidency, and the magnitude of his accomplishments in the months after Kennedy’s assassination.
Essentially Caro looks at  the acquisition and use of political power in American democracy, from the perspective both of those who wield it and those who are at its mercy. In an interview with Kurt Vonnegut, he once said: "I was never interested in writing biography just to show the life of a great man," saying he wanted instead "to use biography as a means of illuminating the times and the great forces that shape the times—particularly political power."  I think he accomplished the tast he set out of himself.  Caro, perhaps the premier writer of political biography ever has surely acommplished the task he set out for himself. I would desribe his work as "monumental." 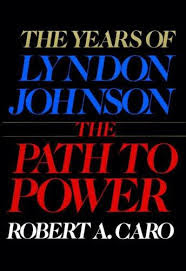 Posted by troutbirder at 4:12 AM 6 comments:

She was teaching junior high English and Geography when at the instigation of several female colleagues she visited the Superintendent of Schools to make spring requisitions.  “We need some eligible & handsome young male teachers to fill next years vacancies,” she suggested.  When she appeared in my classroom that fall to “borrow an overhead projector”, little did I know I’d been “requisitioned.”  Well two out of three, being young and male, proved to be adequate and we hit it off quite well.  She liked the great outdoors as these pictures demonstrate and I was smitten….. or was it doomed?  It was 1965. 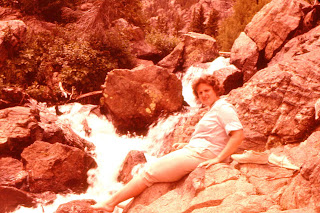 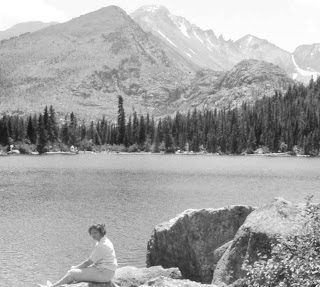 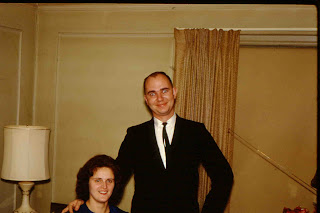 During “the war” (people of my parents generations reference to WWII) we lived in an apartment on the East Side in St. Paul.  My dad parents and siblings all lived within a ten block radius. We lived in the apartment from 1941 till 1945.  To my child eyes my grandpa was very aged.  About once a week, cane in hand, and carrying a small white paper bag, he arrived at our door. Inside was something for me from Bastas bakery just around the corner.  From those days to this my favorite sweet has always been Bismark’s.

In Manitoba and the prairie western provinces of Canada, as well as parts of the Midwest in the US, such  round jelly- or custard-filled doughnuts are commonly called  "bismarks," while a filled bar doughnut is called a "long john", and usually contains pastry creme, custard or whipped cream but can contain a jelly filling.  Yummy!  Think I'll run down to the bakery this morning. We still have a wonderful small town bakery.  Most of them have been replaced by the big box store type in Rochester..... Too bad. 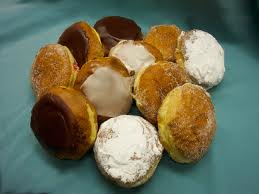 Posted by troutbirder at 2:27 AM 9 comments: 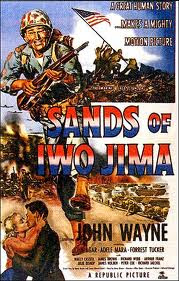 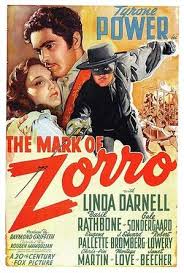 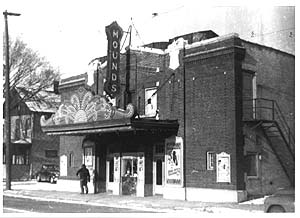 Posted by troutbirder at 4:55 AM 8 comments: 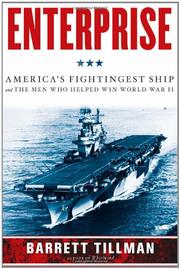 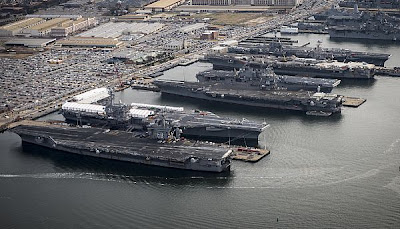 Posted by troutbirder at 5:42 AM 4 comments:

And now in a considerabley lighter vein a book gift from a friend.   "One summer day, someone new waddled into Baron’s life. Her name was Fluffy." Thus begins the sweet tale of a dog, a duck, and true friendship. Laura Rankin’s spare text and emotive art speaks to the heart. Based on a real-life dog and duck duo, Fluffy and Baron is a great book for children of all ages.

Top Ten Reasons Why I Like The Book Fluffy and Baron
#10 The book was a gift from a friend.
# 9 Baron has really funny expressions.
# 8 As a child I got a baby duck for Easter.
# 7 My spouse dresses up as Mother Goose for Halloween.
# 6 Fluffy is a Peking duck, my favorite at Chinese restaurants.
# 5 It’s shorter than War & Peace.
# 4 I’m ready in case I ever have to do "story hour" at the local library.
# 3 The print is big so I can read it even if I can’t find my glasses.
# 2 Friendship and loyalty is where it’s at.
# 1 Baron is my bud 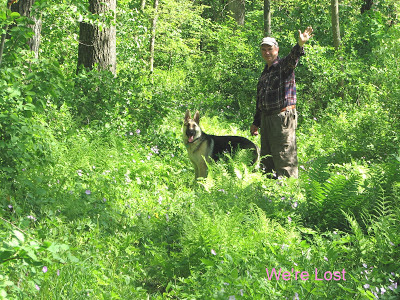