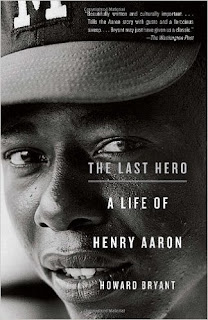 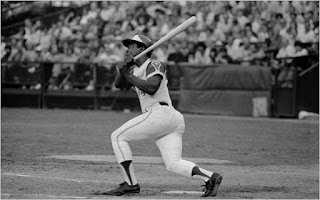 Did you watch the movie "42" ? So well done.
I will read this one,I am a huge Baseball fan. I am reading The Grind Inside Baseball's Endless Season - Author Barry Svrluga.
Carla

I used to watch baseball all the time, I learned to appreciate baseball on weekends when my Dad was home fixing on machinery at the farm and the ball game was on the radio. I got to see the Twins play once back in the 1960's in the old stadium that was new then. It was a big deal for my brother and I just farm kids :)

Ironically, I just saw Hank Aaron on TV before one of the World Series games, and I turned to my husband and said, "I didn't realize Hank Aaron was still alive." So many greats from that time period have passed on, including my hero Ernie Banks. It's hard to imagine today what these early African-American players had to endure when they entered the Major Leagues.

I am not much of a baseball fan, but this sounds like an inspiring story. Thanks for reviewing.

Hank Aaron was a national treasure. Though I'm not a baseball fan at all, this book still sounds compelling. Thanks for the great review!

I have no idea what baseball is like but I always like to hear about exceptional players in any game. I imagine hubby would like to read this book.

When I was a little kid, hearing about Hank Aaron and not watching much TV, I didn't realize that he was black. All I knew was that he was a great player. This sounds like an important book for baseball fans.

I might be prejudiced but I consider Hank Aaron's breaking Babe Ruth's home record the number one accomplishment ever in sports, and for the reasons you mention. Baseball was still America's pastime then and Babe Ruth was ensconced at the top of it as a god like figure. Everyone I knew was pulling against Aaron. The sports writers and announcers were. The country was, at least the country that counted in the mass media. They might have been pulling for Henry back on the block in Mobile and on other segregated blocks around the country, but there was a whole lot of bad karma flowing against him. The young pitchers were throwing those new sliders, from the high mound then, he was getting old, playing night games and having to pick up pitches while trying to forget that a rifle might be aimed at the back of his head. It took me a long time to come around to the point where I admired Aaron, and finally come to be in awe of what he did, but I did.

But I thought of it something in the world of sports that spilled over into the broader culture. After reading your review I'll have to rethink that. In fact I'm downloading the book now. I don't really even follow baseball anymore. This should be an interesting trip. Thanks for the great review.