The Dog Master - A Novel of the First Dog

As regular readers of my little book blog (Troutbirder II) probably know, my reading tastes are fairly eclectic but leaning a little to history and biography.  My latest read ( a novel) perhaps leans way too far back in human history,  like maybe thirty thousand years to the upper Paleolithic period.  The reason for this stretch is quite simple…. My lifelong love for dogs.


Set against the most dramatic time in our species' history, The Dog Master tells the story of one tribe's struggle for survival and one extraordinary man's bond with a wolf - a friendship that changed mankind forever


Thirty thousand years ago, ice was storming the planet. Among the species forced out of the trees and onto the steppes by the advancing cold was modern man, who was both predator and prey.


No stranger to the experiences that make us human-a mother's love and a father's betrayal, tribal war and increasing famine, political intrigue and forbidden love, joy and hope and devastating loss-our ancestors competed for scant resources in a brutal landscape.


Mankind stood on the cold brink of extinction...but they had a unique advantage over other species, a new “technology” - domesticated wolves.


Only a set of extraordinary circumstances could have transformed one of these fierce creatures into a hunting companion, a bodyguard, a soldier, and a friend. The Dog Master by W. Bruce Cameron is an evocative glimpse of prehistory, an emotional coming of age saga, a thrilling tale of survival against all odds, and the exciting, imaginative story of the first dog.


The story follows three timelines: the present day life of a professor who believes humans succeeded because of their early relationship with dogs, the early life of Mal's mother, and Mal's attempts to survive with a wolf he names Dog. The story opens with Mal struggling to survive on his own after being cast out of his tribe. He finds a wounded wolf with three puppies and they bond together in a cave. I was instantly hooked by this premise. Every chapter ended with a cliffhanger that propelled me through the book. I cared deeply about Mal's mother and both of her sons. She is intelligent and resourceful, my favorite type of character. The pre-history setting was fascinating, in part because everything is truly life or death. I also loved Clan of the Cave Bear, which I read some years ago. This book is better. I highly recommend  it. Even to people who prefer cats….:) 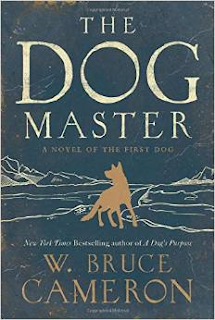 I enjoyed Clan of the Cave Bear so this is definitely going on my wish list. I also love dogs and a story about their early history and how it entwined with ours sounds fascinating.

Sounds really good, I will have to see if my library has it

I liked Clan of the Cave Bear too, so perhaps I will give this one a try! I like dogs too....some days more than people:)

This has got to be good if it's better than Clan of the Cave Bear. I read that whole series.

Thank you for review :-)

This is a must-read book... I just hope I can find it somewhere.

I'm unfamiliar with this one. Thanks for bringing it to our attention.

I love books about dogs. Well, except for "The Art of Racing in the Rain." That was so depressing I can't even bear to think of it.

It sounds wonderful enough that I'll certainly put it on my list.

Speaking of dogs and wolves, this past winter I really enjoyed re-reading Jack London's 'White Fang' and 'The Call of the Wild'. On another level entirely I'd also recommend Richard Adams' 'Plague Dogs' if you haven't read it recently.

As a fan of Clan of the Cave Bear and dogs, this is a must have. Thank you so much. I am going in search now.

now this sounds like a goof book!
My shoulder is healing. Slowly. Thank you for asking. How is yours? I agree with you - the entire process requires more patience than I have been blessed with and I *am trying. The biggest issue is actually the dogs. I walk them on the left. It is my left shoulder. I'm working my GSD for her IPO1 in Dec and training isn't waiting on me to heel. My trainer says "well everything is off leash anyway" and it would be if she were perfect but I'm a novice trainer and so neither of us are quite "off leash" ready. Hah! I'm lucky though - my surgeon says I"m light years ahead of where I should be as far as healing is concerned and if I don't mess it up being impatient I should have a full recovery. Back to patience again... argh.

I loved Clan of the Cave Bear! And you say this book is even better? I must read it, then! Thanks for reviewing! Oh, and I like the sounds of the 3 storylines.

As someone who has never owned a dog, this sort of fascinates me.

I love dogs, too, and I've enjoyed a number of documentary films that speculate about how dogs were domesticated. This sounds like a slightly different take, but also sounds like a book I would enjoy reading. Thanks for the review.

This sounds AMAZING! I am such a dog person. I have to read this book. Thanks so much for the review!

That does sound good. I enjoyed Clan of the Cave Bear too. I read it as a teen, and CotCB led me to my first agent, who represented Jean Auel. Thanks for the intro to an author new to me. I'll look for it next time I'm in a bookstore.

I never could get into Clan of the Cave Bear, and the prehistoric setting isn't as appealing to me. Still, as a dog lover, too, this does sound appealing, especially if it has some suspense as well. Thanks for the great review!

Sounds really interesting. I am fascinated by the ways dogs can help us.

A friend of mine just finished this book and liked it. Sounds like I should add it to "the pile."