The Lion's Gate by Steven Pressfield 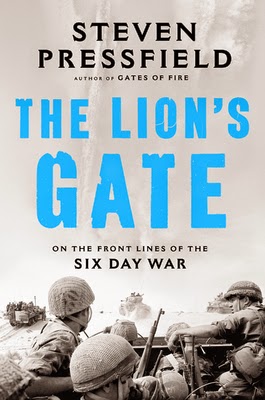 Lot of excellent histories have been written of the Six Day War, whereby Israel against seemingly overwhelming odds overcame the combined forces of Jordan, Syria and Egypt.  Steven Pressfield, author of one of my all-time favorite combat novels, his classic "Gates of Fire" about the Greeks at Thermopylae, has shown his ability to write about a specific war in terms of its universality.   He  takes a different approach in  The Lion's Gate. It is what he calls a "hybrid history," a narrative story drawing on hundreds of hours of interviews with veterans of the war, documentary research and the author's imagination. The whole book is composed of first-person accounts, most factual but a few invented. And what an account it is.  That account is not “balanced”. There are no Arab stories. The author wrote it that way to tell about war as it meant to a people. We know that beliefs come down to us from history which in the Middle East seems particularly dark and confused. And so is “justice” over thousands of years.


Belief in their mission never wavers among the Israelis. "If we lose, what our enemies will do to us will make Auschwitz look like summer camp," says Danny Matt, a paratroop commander under Ariel Sharon.


A former U.S. Marine, Pressfield knows war and he knows the men who fight wars. He admires the Israelis for their victory, but he does not discount the grim losses on both sides.


"We looked death in the eye but death did not look away," he says. "He took as many of us as he wanted."  I found this account most interesting.

Posted by troutbirder at 9:23 AM

Sounds like an interesting book. I like books that use real first person accounts. I remember that war and thought at the time that no war should last more than 6 days. Kudos to the Israelis.

Sounds like a good read. Thank you for the review.
Carla

I appreciate your framing it as you did, too, and pointing out the absence of the other side of the narrative. As you know I'm no fan of Zionism, but it's like you say. It's a good thing nonetheless to remember that Zionists are people. With hopes and dreams and aspirations. Jews have done way more than their share of being kicked around but I don't think the solution was to go down to Palestine and take someone else's land. Still, a way forward has to be found and something like this book sounds like a good window into understanding where they're coming from. I've listened to Israeli National Radio podcasts for that reason, just to remind myself. Israel National Radio is kind of the voice of the settlers, I think; they are very Zionist Zionists.

When that war came on I was a kid with my family up at Expo 67 and I remember my dad and older brother following it on the radio in our school bus camper, and the Life magazine cover that week being "Israel's Swift Victory."

Noam Chomsky, a big critic of Israeli policy but a Zionist, says he wasn't a Zionist "til 67," meaning that war, which apparently put Israel's future into question in many minds for awhile. Thanks for the insightful review.

I would like to read this book. The media never really wanted to cover this war and then they are still upset today that Israel won it.