You Can't Judge A Book By Its Cover 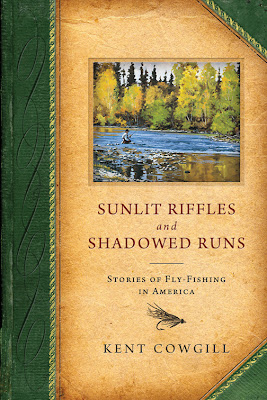 The cover had everything going for it. The subtitle of Kent Cowgill’s collection of short fiction, Sunlit Riffles and Shadowed Runs, is “Stories of Fly Fishing in America.” The jacket shows a beautiful stream setting very reminiscent of southeastern Minnesota’s Bluff country where the honored professor author and I both live. Sad to say this collection of sixteen short stories are really vignettes or slices of life with fly-fishing purely as background. There not about fly fishing; they’re abut fly fishermen.  And there’s the rub. I was misled by the cover hoping, perhaps, for another John Gierach. Still the stories are interesting and very well written. I’ve always maintained that books about or involving fly fishing are almost the only ones in the “huntin/fishin” genre which often rise to level of real literature. This one meets that test.


There’s the terminally ill angler who, on what he knows will be his last visit to the stream, faces his mortality sooner and more suddenly than he expected when he’s trapped by a flash flood; the college professor who blithely cancels his afternoon classes so he can sneak out on the last day of the trout season only to find his best friend’s van—and his wife’s Honda—parked at his secret spot; the young soldier on weekend leave who, parched after a long day of fishing in the summer heat, begs a drink at a ranch house and is invited in by an emotionally vulnerable woman who’s clearly thirsting for something herself; the angler on a much anticipated trip to a famous Western trout stream who finds himself caught in an episode of “river rage,” the consequences of which are uglier and more far-reaching than anyone could have foreseen.


The book though does have some lighter moments.  Here’s an excerpt from the book’s first story, “Day of Mourning,” in which the fishing buddies of a deceased friend suck up to his widow in the hopes off getting their hands on his prized Payne fly rod:


“He was a fine man,” Hap offered, his voice the texture of sawdust.


“He was an asshole,” the widow said.


Hap nodded awkwardly. “That too,” he mumbled, swallowing. “A man of parts.” Troutbirder on his first ever fly-fishing trip to the blue ribbon trout streams of Montana circa the the late seventies. . He didn't know what he was doing at the point as evidenced by the old black rubber fireman's boots a retired friend had given him. :)

Posted by troutbirder at 8:34 AM

Bummer. It definitely says it's stories of fly fishing. And too bad it couldn't take your mind off the chigger bites. Next time try Sting-eze Max or After Bite. Both are great for itching insect bites and chiggers.

I always thought that once you got your rod ,boots and your license,a lesson or three, you knew what you needed to know about fly fishing to go out and just do it! I'll bet there is a Fly Fishing for Dummies, is there? The book you got sounds like something I would like a whole lot and I never fish!

Afternoon, that's to bad, so hard to tell a book by it's cover, :( Francine.

I just want to ditto what Jo said except I use to fish in the little pond/lake by the house. I guess that really doesn't qualify as fishing though especially since I don't do it anymore.

You write very good reviews worthy of publication. Have you ever offered your services to the Strib?

It sounds like an eclectic groups of interesting stories.

I like your book reviews. I know what to try and find to read, and what to avoid!! LOL

chiggars. I hear you. and falling on a biking trail? wow. I biked on a trail once and was terrified the entire time and will only bike on a road or old railway path now. I enjoyed the expert about the widow and the fishing buddies. I have too often been led astray by a cover... hope those bites find relief soon!

I'm going to look for this book, sounds good. I don't care much for the standard 'doc and me went fishin'' genre, nor am I interested in someone writing about throwing a perfect loop. So far, the best books I've read that are somewhat about fly fishing are Roderick Haig-Brown's works, like "Seasons of a River".

However, the blogs about fly fishing that are the most tedious are the ones that wax rhapsodical about it as though it was a metaphor for a happy life.

I like books with words for the cover. Of course they say, a picture is worth a thousand words.

In this vein, have you seen the cartoon of the cat getting mad about Harper Lee's famous novel, because "There is nothing in this book about how to kill a mockingbird!"