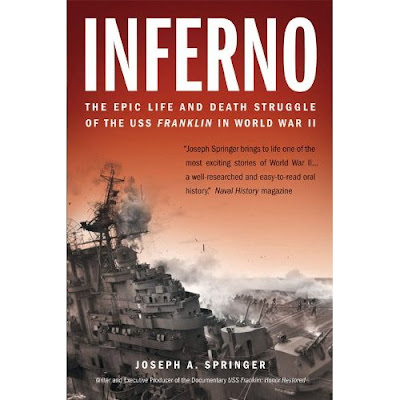 Inferno - The Epic Life and Death struggle Of The USS Franklin In World War II by Joseph A. Springer. In the early morning hour of March 19, 1945, just fifty-five miles south of Japan, a lone Japanese aircraft dropped from the clouds over the American fleet and trageted the aircraft carrier USS Franklin with a single bomb. "Big Ben" was about to become "the ship that wouldn't die," a nickname earned through fire and blood as she shuddered for an hour and a half under the explosions of her own ordnance that had been triggered by the bombing. Many of the crew not immediately killed in the explosions were blown overboard, driven off y fire, or wounded, a source of myriad heroic tales of survival. The officers and enlisted men left aboard the faltering ship (and those allowed to rejoin her later) were able to save her through sheer valor and tenacity. The enemy aircraft was shot down and disappeared into the sea, but Franklin remained afloat, against all odds and with casualties totaling 798 killed and more that 487 wounded - one of the most harrowing and amazing ordeals of any American carrier. This is her riveting story, from start to finish, in the eloquent and sometimes emotional words of the men who served aboard her.

I knew one of them Jim Erredge - AerM 1/c7 CV 13. He was a faculty member (adult agriculture) at the high school in Spring Valley, MN. where I began my teaching career. He was a member of the 704 Club. That is the number of sailors and airmen, out of a total of over 3,000, who managed to remain aboard the ship during the epic fight to keep it afloat. This is a great and telling book about naval warfare and that Greatest Generation who brought this country to victory in the Pacific War.
Posted by troutbirder at 1:27 PM

Wow, this sounds like it would make a terrific movie!

I have not yet read this book. I can't do a lot of reading anymore.

Our Legion Post has a Meet-A-Vet Day and I was able to talk to a survivor of the USS Franklin.

Also a survivor of a kamikaze attack on the USS Princeton.

I recently finished reading "In Danger's Hour" about the kamikaze attack on the USS Bunker Hill. It was written by a son of Robert Kennedy.

Those kamikazees were some potent weapon.

I think this would make a really good movie.

I cannot even begin to know the terror they must have felt that day:(