Tinker Tailor Soldier Spy is about the search for a high-level Soviet spy within MI6, the British intelligence service. This mole is not to be found in an exotic location, but seems more than likely to be one of the men in the room.
The movie is based on John Le Carre's 1974 novel, which redefined modern spy fiction into complex thrillers. But this is not the book/movie James Bond type with babes, chases, explosions et.all. It is as Churchill described the Soviet Union, a riddle wrapped inside an enigma. Our hero inside this story is George Smiley, played superbly by Gary Oldman and a fine supporting cast. A highly ranked Soviet double agent is high inside British intelligence during the Cold War. But who is he? Laconic George Smiley is given the task of finding out. Oscar nomination followed in the wake of the critics high praise for this movie. The general public was less enthralled. I was more of the later. The setting and the acting was great. The plot was complex. Way to complex. Now mysteries are supposed to be that way but this one, like the book, was over the top. The editing, jumping back and forth, didn't help either. Unless your a member of the sophisticated, intellectual elite movie critics or work in advanced nuclear physics and cryptography or something akin to that, perphaps like me you'd come away from the theater, saying to yourself..... huh? 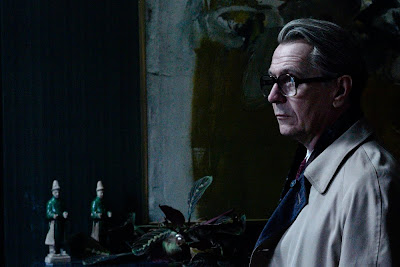 Posted by troutbirder at 4:31 AM

Ya, I prob'ly wouldn't like it. It sounds like the old TV series Mission Impossible....if you took your eye off the screen even for a second, you'd be forever lost...what with the masks etc that they'd peal off.

Interesting. We haven't seen this movie yet, but were considering it. I will have my husband read your review. Thanks.

I like Gary Oldman a lot, and I like this genre a lot, so I can't miss this one -- but not having read the book I imagine I'll probably have to see it more than once before I'm not saying "huh?"!

Interesting. I love Le Carre and I loved the old television mini series with Alec Guinness. He made a wonderful Smiley. I really like Gary Oldman, as well, and I wanted to see the movie and see how he interpreted the role, but I never did manage to get to the theater when it was playing here. Guess I'll have to wait for the DVD or do the "pay per view" thing.

I loved the book (read years and years ago), and I am looking forward to the movie, but forewarned is forearmed. Other critics have been as confused as you, and, knowing myself, I'll be even more confused than all of you put together!

THANKS FOR THE WORD VERIFICATION FREE BLOG. It's so bad that I think I'm actually going to blog about that very matter. It always takes me three or four tries, sometimes more, to post my comments. Talk about a disincentive!