After I had (in the previous post) misidentified the Washington monument as a high rise hotel, we saw the new Holocaust Museum, and then headed down the mall to pay our respects at the Vietnam Memorial and to President Lincoln. On the way back up the from the Lincoln Memorial we noticed a large crowd was gathered around some statues. They represented some soldiers walking carefully across a rice paddy. 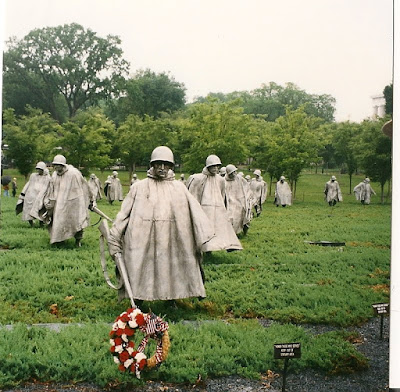 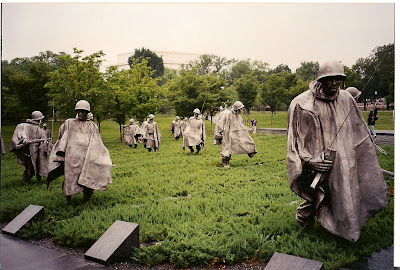 It was the memorial to the veterans of one of America’s forgotten wars. Korea. Unfortunately, I must admit I was unfamiliar with the memorials very existence. Of course, I had read many books about the war itself. I had also talked with my retired Marine Corps brother-in- law about his experiences there as an 18 year old. He had gone straight into the thick of the battle from high school in Mississippi.

As we approached the crowd it was apparent some sort of ceremony was taking place. TV and movie cameras were everywhere. Reporters gathered around a distinguished looking elderly gentleman. I asked a member of the crowd who the gentlemen was.
"You mean the man wearing the Congressional Medal of Honor," he replied. This is America's highest decoration for valor in defense of our country.

"His name is General Ray Davis." Raymond Gilbert "Ray" Davis (January 13, 1915 – September 3, 2003) was a highly decorated Marine Corps officer, serving in World War, the Korean War and the Vietnam War. His single most notable endeavor was the salvation of hundreds of trapped Marines during the 1950 Battle of Chosin Reservoir while commanding the 1st Battalion, 7th Marines for which he was awarded the Medal of Honor. 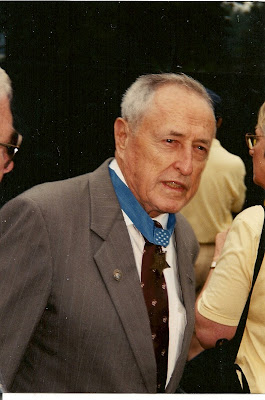 History. It's all around us. You just have to keep you eyes open.
Posted by troutbirder at 2:59 AM

Visit my photo album tribute to these centenarian veteran shipmates and other Pearl Harbor Survivors:

I hadn't heard of the memorial - thanks for the tour. The closest I got to the Korean War was watching MASH on TV. Great show.

I'd never seen or heard of the Korean War Memorial, either. Thank you for the photos - it should be highlighted.